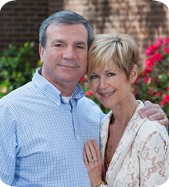 Time management is a key to my productivity. When I was a young professional, I wasn’t really efficient at what I did. I was trained by a woman who was a CPA, and she put tremendous emphasis on the importance of managing time well. Each time I see people working long hours, I wonder if they’re working efficiently. What I had found was that an efficient, knowledgeable person is far more productive and can manage life better.

I’ve been blessed, because of time management skills, to be a big contributor to the rearing of my children. When you’re on your deathbed, nobody will ask if you wished you would have worked harder. You’ll think, “How much time did I spend with my family?” I have lived by that principle. I feel very fortunate to have a good career while having the time to spend with my family, which I wouldn’t trade for the world.

My wife, Sally, and I wanted to be involved in our kids’ lives. One of our sons was in the band in high school, and another was on the football team. Football is a big deal in Texas. I drove the truck that brought the band equipment to the games.

I was a freshman at Marquette University, and I was a math major. My brother was a junior there. He said, “It’s fine and dandy doing all that math, but how are you going to make a living?” That kind of resonated with me. I knew I wasn’t going to go to graduate school in mathematics, and he suggested I go into accounting, to use my math skills and make a decent living.

I’ve worked in public accounting and also for private equity doing mergers. I’ve probably done close to 75 acquisitions and worked for some of the finest M&A people in the world. I received an offer from a publisher who does CPE work to write a how-to book on M&A. I was a little concerned about doing that because, frankly, giving up secrets is expensive. I didn’t want to do it at the time. I might do it when I retire. I didn’t want to be in negotiations, having given away secrets on how to successfully drive synergies.

I was very fortunate to be a protégé of Geoff Wold, a CPA who was my reporting partner in public accounting. We were on our way to see a client one day. I said, “How do you recommend I improve?” He said, “First, build strong tech skills, and second, be able to communicate those skills.” I followed that. As a young man, I went to my father when I was trying to figure out what to do with my life. He said, “It’s not what you choose; you just need to be the best at what you do.” Those are the two quotes that I follow in life.

I’m more quantitative based. The more I wrote as a professional, the more I got my verbal skills up. My father made me take Latin to improve my verbal skills, but the scale was still tilted toward quantitative for me. I don’t think you go up the ladder with only one set of skills, on the quantitative side. That gives you the technical base, but I spend 50% of my day communicating.

Warren Buffett said that the language of business is accounting. Then the goal is to take your native language and be able to communicate that in an effective way. You need to have skills in both languages.