The IRS is reviewing the operations of its Whistleblower Office to improve the timeliness and quality of its decisions on whistleblower claims, Deputy Commissioner for Services and Enforcement Steven T. Miller said in an internal IRS memo dated June 20.

The review will yield a set of “expectations” for timely action on whistleblower claims, Miller said. Until the review is completed and new procedures are implemented, Miller asked the Whistleblower Office and the various IRS divisions to adhere to the following timelines:


The guidelines and review came as the IRS faces criticism for lengthy processing of claims under the 2006 legislation that provided enhanced awards under Sec. 7623(b) and established the Whistleblower Office. In its latest annual report to Congress on the use of Sec. 7623, released June 20, the IRS revealed it has received more than 1,635 submissions since 2007 involving more than 10,000 taxpayers (see related graphic) that appeared to meet Sec. 7623(b) threshold requirements. However, the number of submissions and taxpayers fell in fiscal 2011 from the previous year. But the number of claims paid so far under the new provisions remains small. Of 97 whistleblower claims for which the IRS paid awards in fiscal 2011, the number that appeared eligible for enhanced award amounts under Sec. 7623(b) was “too small to qualify for separate reporting” due to taxpayer privacy laws, the report said. Only four of the claims involved collections of more than $2 million, one of the threshold requirements for enhanced awards. 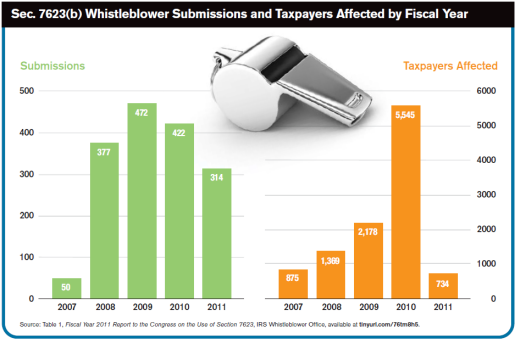