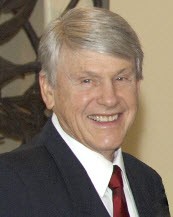 Newton D. Becker, whose preparatory course led to CPA exam success for hundreds of thousands of accountants, died Jan. 2 in Los Angeles after a lengthy illness. He was 83.

Becker was the founder and driving force behind Becker CPA Review, which he started in his hometown of Cleveland and grew into a successful national business. It’s been estimated that as many as half the CPAs in the United States passed the exam with the help of his course, which combined short audiotape segments followed by problems for students to work on to apply what they had learned.

DeVry purchased the business, which came to be called Becker Professional Education, in 1996. Becker worked until his 70th birthday, retiring in 1998.

“He was absolutely dedicated to student success,” said Tom Vucinic, former president of Becker Professional Education. “What he did, besides put together what we all believe is the best curriculum … is he instilled by his own leadership this culture of, ‘We care about our students. We want them to pass.’”

Becker once worked as a CPA in the Price, Waterhouse & Co. office in Cleveland. After he passed the CPA exam with difficulty, Vucinic said, he didn’t think there was a quality review program for people who planned to take the exam.

He used his own notes to start a CPA review course in 1957 for the staff of Price, Waterhouse, teaching for free on his own time. He left Price, Waterhouse in 1960 to devote more time to his course. By 1966, it was the nation’s pre-eminent preparatory system for the exam.

“In many respects, Newt was a genius,” said Norm Meonske, a close friend and Kent State University professor who has been a Becker instructor for more than 30 years. “And he was an entrepreneur. He knew how to put together this course and have it taught across the country and get consistent results at a low price.”

Meonske said Becker also knew how to motivate students and employees, and he was driven to constantly improve the course and keep it relevant. Until 1996, the CPA exam was made public months after it was taken, and Becker had his staff review each question to ensure it was covered in the audiotapes. If it wasn’t, Becker would add it for the next year.

The course was structured to help students remain engaged. Many students already were working eight-hour days—and often longer—in the accounting profession, and Becker realized that it would be difficult to keep their attention through a lengthy lecture.

So he personally recorded five- to eight-minute segments to be played at more than 100 classrooms across the country where the course was being given. Then he had instructors put questions on an overhead projector for students to work through during the four-hour classes.

More than 400,000 people who took his course have passed the exam and become CPAs. Meonske said Becker often allowed students who had financial difficulties take his course for free or at reduced rates.

“He’s made a better life for these people by helping them get through the exam,” Meonske said.

Becker also became a prominent philanthropist and supporter of the environment. He was the founding investor and chairman of the board of Luz International, a solar energy company that had its headquarters in Los Angeles with research and manufacturing facilities in Jerusalem. He also invested in and chaired the board of directors of a company called Electric Fuel, which made zinc air batteries for electric vehicles.

He is survived by his wife, Rochelle; four sons; one daughter; and nine grandchildren. A memorial service was held Jan. 5 at Tanach Chapel at Mount Sinai Memorial Parks and Mortuaries in Hollywood Hills, Calif.