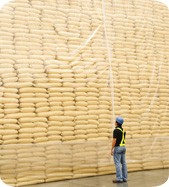 During inflationary times, companies can reduce their taxable income by using the last-in, first-out (LIFO) cost flow assumption for inventories. However, the tax savings from using LIFO come at a cost. Under the LIFO conformity rule in Sec. 472(c), if LIFO is used on a taxpayer’s tax return, no other method can be used to value inventory to calculate income, profit, or loss in any report or statement covering the same tax year that is provided to shareholders and other owners, or to creditors. The IRS strictly enforces this rule.

The increase in multinational companies and the disparity in financial reporting standards among countries add to the complexity of satisfying the LIFO conformity rule. While LIFO is allowed under U.S. GAAP, it is not allowed under IFRS. Violating the LIFO conformity rule would certainly be a concern if the United States adopts IFRS for financial reporting rules; however, even if the United States does not adopt IFRS, these standards are increasingly being used globally. Financial statement preparers for U.S. entities that are members of larger consolidated groups with foreign operations or ownership need to be aware of what is and is not allowable to avoid violating the conformity rule.

In a recent legal advice memorandum (FAA 20114702F), the IRS determined that a U.S. taxpayer had violated the LIFO conformity rule by providing a bank with financial statements prepared under both U.S. GAAP and IFRS. In this case, the taxpayer, which had been using LIFO for both financial statement and tax reporting purposes, was bought by a foreign entity that used IFRS for financial reporting purposes. The taxpayer continued to use LIFO for tax and financial reporting purposes but reported to its foreign parent on an IFRS (non-LIFO) basis. To meet the bank requirements for a letter of credit, the taxpayer provided a nonconsolidated IFRS-only balance sheet and income statement, and a balance sheet and income statement in a three-column tabular format showing the reconciliation between IFRS and U.S. GAAP. The U.S. GAAP column was calculated using LIFO to value inventories. Analyzing the mistakes made by this company that led to the decision in FAA 20114702F can help both domestic and multinational companies better understand what is allowable under the conformity rule.

In all these situations, the information provided to these agencies did not violate the conformity rule because the agencies kept the information confidential and did not use the information for purposes other than the official purpose for which it was collected. In addition, using a non-LIFO method to calculate and report a financial forecast is not a violation of the LIFO conformity rule, as forecasts are speculative and do not report actual income, profit, or loss (Rev. Rul. 88-84).

Entities with less than 30% of the total operating assets used in foreign operations may also fall under this exception if, based on the facts and circumstances of the case, it is determined that they still meet the qualification of “substantial foreign operations.” (See, e.g., Letter Rulings 200703018 and 200540005.) It is not clear from the facts presented in FAA 20114702F whether the foreign-owned consolidated group would have met the “substantial foreign operations” test, but if that test had been met, providing a consolidated financial statement using a non-LIFO method would not have been considered a violation of the LIFO conformity rule. This exception does not apply to a domestically controlled consolidated group (Rev. Rul. 89-41).

The final mistake the taxpayer made was that the statements containing non-LIFO information were not marked as supplementary or presented in a format that could be considered acceptable under the conformity rule. Regs. Sec. 1.472-2(e) provides an exception to the conformity rule that allows a taxpayer to use a method other than LIFO in reports that are provided as a supplement or an explanation of their primary presentation of income, profit, or loss. Specific rules, however, have to be met for the information to be considered as supplemental. Information provided in an appendix or supplement to the income statement qualifies only if it is issued in the same report as the income statement and clearly marked as an appendix or supplement. The item being explained in the supplement must be presented in the main statement or report on the LIFO basis. The only time that a note or notes presented on the face of the income statement are considered supplemental is if all the notes are presented together on the face of the statement.

The rules for the balance sheet are somewhat more flexible, in that the parenthetical disclosure on the face of the balance sheet is considered supplemental information and therefore does not violate the conformity rule (Regs. Sec. 1.472-2(e)(4)). Examples that satisfy the exception in Regs. Sec. 1.472-2(e) are explained and illustrated below. For these examples, the taxpayer’s financial statements on a U.S. GAAP (LIFO) and an IFRS (non-LIFO) basis are shown in Exhibit 1. The current-year difference between LIFO and non-LIFO cost of goods sold is $60,000. The cumulative effect of the difference between LIFO and non-LIFO on the balance sheet is $150,000. 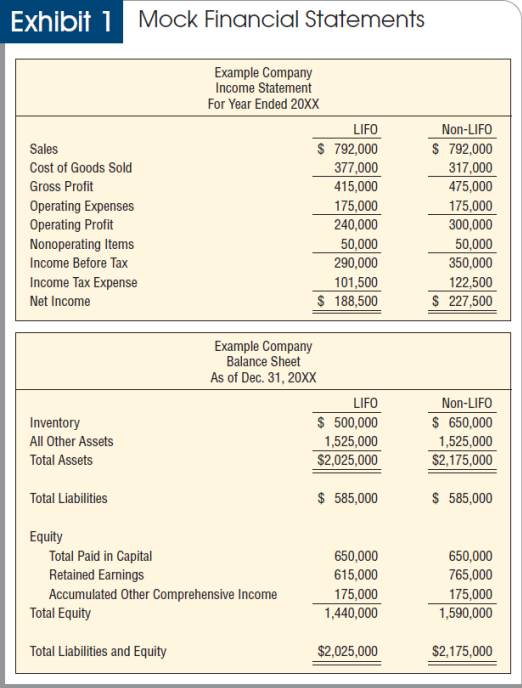 The IFRS-only balance sheet that was provided to the bank violated the conformity rule because the non-LIFO information was not supplemental, but rather the primary presentation of the financial information. The taxpayer could have provided the creditor with the IFRS balance sheet information if that information had been presented in parenthetical disclosures as shown in Exhibit 2 (based on the financial statements from Exhibit 1) rather than as the primary accounting method. 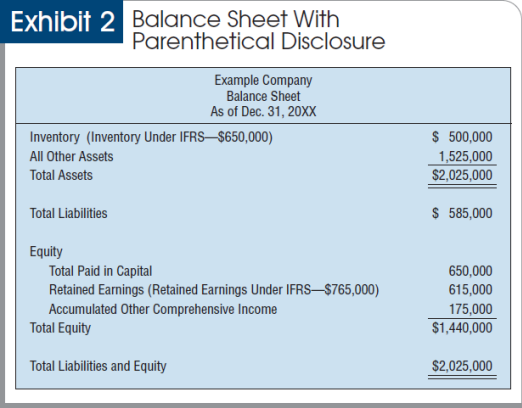 It should be noted that for companies that do not want to translate every inventory-related number in their financial statements to the LIFO basis, there are some presentation options that would not violate the conformity rule. LIFO does not have to be used to calculate cost of goods sold or operating profit in the primary income statement as long as there is an adjustment so that ending net income is calculated on a LIFO basis. 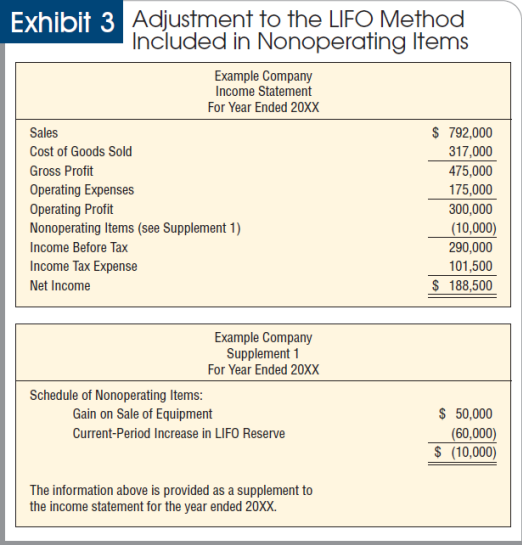 Valuation of the inventory asset on the balance sheet using a non-LIFO basis is not considered a violation of the conformity rule as long as equity is not calculated in a way that states income, profit, or loss for the current year under a non-LIFO basis (Regs. Sec. 1.472-2(e)(4)). In Letter Ruling 201034004, the IRS said that it was not a conformity violation for a taxpayer to provide a LIFO-basis income statement and a balance sheet with inventory and total equity on a non-LIFO basis if retained earnings are on the LIFO basis and a conversion to the non-LIFO basis is included in the total of other comprehensive income. The detail of other comprehensive income can be provided in a secondary schedule that is clearly marked as a supplement as illustrated in Exhibit 4 (once again, based on the financial statements from Exhibit 1). The income statement is fully presented on the LIFO basis. In the balance sheet, inventory is calculated on a non-LIFO basis, retained earnings is calculated on the LIFO basis, and the $150,000 cumulative LIFO-effect adjustment is included in the total of accumulated other comprehensive income. 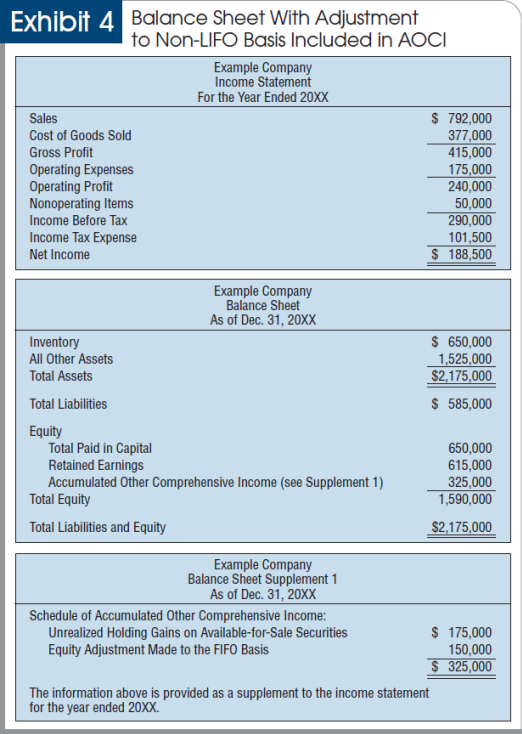 Violating the LIFO conformity rule could lead to a company’s loss of the right to use LIFO for tax reporting purposes, which would result in a large taxable gain. Organizations that use LIFO for tax reporting purposes need to be careful to not issue financial information that would violate the conformity rule. This is becoming especially important as more U.S. corporations are being required to issue certain information under the IFRS rules because they are affiliated with a foreign group that reports under IFRS. A solid understanding of what is and is not allowed under the conformity rule can help U.S. taxpayers avoid the negative consequences that occur when the conformity rule is violated. If a taxpayer is concerned about violating the conformity rule, a private letter ruling should be requested before issuing financial statements or providing other financial information. Instructions for requesting a private letter ruling can be found in Rev. Proc. 2012-1.

The last-in, first-out (LIFO) inventory method is an effective way to reduce taxes.

Using LIFO, however, requires taxpayers to be consistent. The LIFO conformity rule requires taxpayers that elect to use LIFO for tax purposes to use no method other than LIFO to ascertain the income, profit, or loss for the purpose of a report or statement to shareholders, partners, or other proprietors, or to beneficiaries, or for credit purposes.

IFRS does not recognize LIFO, yet taxpayers with business operations outside the United States are often required to provide restated financial information that complies with IFRS.

Providing this information may violate the LIFO conformity rule. This article discusses ways to avoid this problem and provides illustrations of alternative reporting statements.