Financial Regulatory Reform: What You Need to Know 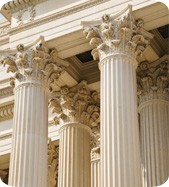 The Dodd-Frank Wall Street Reform and Consumer Protection Act, which became law in July, will create new regulations for companies that extend credit to consumers, exempt small public companies from Sarbanes-Oxley section 404(b), make auditors of broker-dealers subject to PCAOB regulation and change registration requirements for investment advisers. The profession successfully advocated for CPAs to be carved out of the new Consumer Financial Protection Bureau for usual and customary activities.

Some highlights of the legislation that may be of particular interest to CPAs are summarized below (see Exhibit 1 for additional details).

The legislation creates a new systemic risk regulator called the Financial Stability Oversight Council. The council, chaired by the Treasury secretary and whose members will be heads of regulatory agencies, including the chairmen of the Federal Reserve, FDIC and SEC among others, will identify any company, product or activity that could threaten the financial system.

The Federal Reserve will supervise the companies identified by the council, and the FDIC would carry out instructions by the council to close large entities under a new orderly liquidation authority. The council, through the Federal Reserve, will also have the power to break up large firms, require increased reserves, or veto rules created by another new regulator—the Bureau of Consumer Financial Protection—with a two-thirds vote.

The Bureau of Consumer Financial Protection consolidates most federal regulation of financial services offered to consumers and replaces the Office of Thrift Supervision’s seat on the FDIC board. Almost all credit providers, including mortgage lenders, providers of payday loans, other nonbank financial companies, and banks and credit unions with assets over $10 billion will be subject to new regulations.

The act amends the Sarbanes-Oxley Act (SOX) to make permanent the exemption from its section 404(b) requirement for nonaccelerated filers (those with less than $75 million in market cap) that has temporarily been in effect by order of the SEC. The act also requires the SEC to complete a study within nine months of the act’s enactment on how to reduce the burden of 404(b) compliance for companies with market caps between $75 million and $250 million. The study will consider whether any such methods of reducing the burden, or a complete exemption, would encourage companies to list on exchanges.

The act closed an ambiguity in SOX. Under SOX, auditors of broker-dealers were required to register with the board, but the board did not find SOX gave it authority to regulate auditors of privately-held broker-dealers. “The Dodd-Frank Act provides the PCAOB with standard-setting, inspection and disciplinary authority regarding broker-dealer audits,” said the PCAOB in a statement.

However, the act allows the PCAOB, in its inspection rule, to differentiate among broker-dealer classes and exempt introducing brokers such as those who do not engage in clearing, carrying or custody of client assets. The act reconciles registration with inspection so that any auditors not covered by the inspection rule would also no longer be required to register with the PCAOB.

The act also allows the PCAOB, under certain circumstances, to share information with foreign auditor oversight authorities, which should help the board gain access to foreign regulators’ inspection information as well.

The PCAOB said more information about its plans to implement this authority and guidance for auditors of brokers and dealers will be forthcoming.

The act gives the Financial Stability Oversight Council the duty to monitor domestic and international financial regulatory proposals and developments, including insurance and accounting issues, and to advise Congress and make recommendations in such areas that will enhance the integrity, efficiency, competitiveness and stability of the U.S. financial markets.

In a compromise reached in response to concerns raised by the AICPA and others over more onerous language proposed in earlier stages of the legislation, the final act allows the council to “submit comments” to the SEC and any standard-setting body with respect to an existing or proposed accounting principle, standard or procedure.

The act also provides a permanent funding mechanism for GASB by authorizing the SEC to require a national securities association to levy an “accounting support fee,” the proceeds from which would be remitted to the Financial Accounting Foundation.

Currently, the Investment Advisers Act of 1940 requires investment advisers with over $30 million in assets under management to register with the SEC.

Advisers with assets under management between $25 million and $30 million may elect to register with the SEC. Under the Dodd-Frank act, this threshold will be raised to $100 million, thus shifting more than 4,000 of approximately 11,500 SEC-registered investment advisers to state securities regulatory oversight, said AICPA Senior Manager Teighlor March.

Because it lowers the legal standard from “knowing” to “knowing or reckless,” the act may make it easier for the SEC to prosecute aiders and abettors of those who commit securities fraud under the Securities Act of 1933, the Securities Exchange Act of 1934, and the Investment Advisers Act of 1940.

The AICPA and state CPA societies successfully lobbied to exclude more onerous amendments to the bill that would have opened the door for trial attorneys to file private rights of action.

Significantly, the act eliminates the private adviser exemption under the Investment Advisers Act of 1940, which will consequently result in more advisers’ having to register with the SEC. Advisers to venture capital funds remain exempt from registration, as well as advisers to private funds if such an adviser acts solely as an adviser to private funds and has U.S. assets under management below $150 million. It also amends the Investment Advisers Act to specifically exclude “family offices” from registration as an investment adviser.

The act requires a nonbinding shareholder vote on executive pay. Compensation based on financial statements that are restated must be returned for the three years preceding the restatement in an amount equal to the excess of what would have been paid under the restated results. Listing exchanges will enforce the compensation policies.

“Management focus on accounting accuracy may be enhanced, but in the end compensation committees may still set compensation at the board’s discretion,” said AICPA Technical Manager Sharon Strother. “Companies may need to review existing compensation contracts.”

The act also requires directors on compensation committees to be independent of the company and its management, and requires new disclosures regarding compensation.

The act requires the SEC, within 180 days after enactment, to issue rules requiring companies to disclose in the proxy statement why they have separated, or combined, the positions of chairman and CEO.

The Office of Thrift Supervision (OTS), which is currently the regulator for savings-and-loan (S&L) financial institutions, will be rolled into the Office of the Comptroller of the Currency (OCC), which also regulates federally chartered banks.

Although the act makes clear that the OTS will no longer exist after its responsibilities are transferred to the OCC, it also allows existing thrift chartered institutions to continue to operate under OCC regulation and the OCC can grant new charters for federal savings banks.

For additional information on the Dodd-Frank Act, see the following online resources: