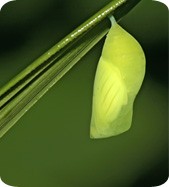 This year will be the Year of the Tiger, according to Chinese custom, but it also could be remembered by investors as the Year of the Roth Conversion, a decision that can have a large impact on investors’ ability to build wealth during their lifetime and preserve wealth for beneficiaries.

Prior to 2010, anyone (except married taxpayers filing separately) with an annual adjusted gross income (AGI) of no greater than $100,000 could convert a traditional IRA to a Roth IRA. The AGI cap has prevented higher-income earners, a class of savers that might have benefited most from this strategy, from participating. However, under the Tax Increase Prevention and Reconciliation Act of 2005 (TIPRA) these previously ineligible taxpayers will be eligible to participate starting this year (including married but separate filers). In fact, there is an incentive to take action in 2010: Everyone who converts this year may defer and spread income recognition from the conversion over tax years 2011 and 2012. A conversion in 2010 thus could reduce the marginal tax rate and total taxes due on what otherwise would be a larger single-year distribution. The 10% penalty tax otherwise imposed on early or excess distributions from an IRA does not apply. A conversion could be an attractive retirement income and estate planning strategy for wealthy individuals and high-income earners who seek to reduce taxes later in life and transfer more wealth to beneficiaries tax-free. But like any other approach to income and taxes, this decision is eventually based on a set of sustainable assumptions and specific objectives of the taxpayer.

Some taxpayers may benefit more than others from converting to a Roth IRA. Assuming there are no cash flow issues, risk management gaps, other tax planning considerations that need to be weighed against the benefit of a conversion, advance tax issues at play, or adverse legislative changes, taxpayers who stand to benefit the most are those who: 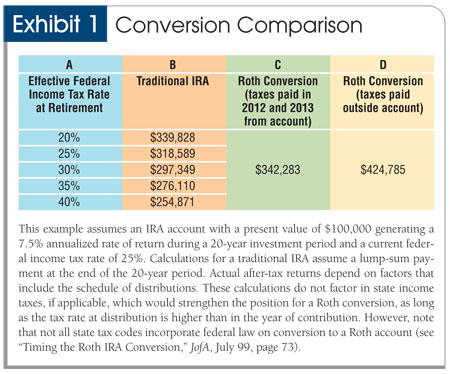 The difference between columns C and D in Exhibit 1 is that income Taxes were paid from within the $100,000 account in column C, whereas income taxes were paid from sources outside the account in column D. This difference in earnings (or tax savings) will not be subject to income tax when withdrawn or transferred to beneficiaries and is a compelling reason to pay taxes from outside sources if possible. Column B shows how a higher tax rate in retirement than at conversion favors conversion.

WILL TAX RATES BE LOWER IN RETIREMENT?

Many advisers note that retirees generally have less income than when they worked and therefore will have a lower tax rate. But that’s far from certain, first because it assumes the brackets will remain unchanged except for inflation adjustments, and second because it’s far from clear most taxpayers’ income goes down enough in retirement to change their tax bracket. Tax rates are subject to change over times as long as the retirement investing horizon. Notably, all federal income tax brackets are scheduled to revert in 2011 to their higher pre-Economic Growth and Tax Relief Reconciliation Act rates. President Barack Obama’s fiscal 2010 budget plan proposes letting only the top two brackets, currently 33% and 35%, revert to the prior rates of 36% and 39.6%.

One reason retirees’ tax rates may not be lower than before retirement is that they often find—contrary to conventional thought—their income needs don’t go down, so they wind up tapping additional sources of income beyond what they had planned. Most advisers and retirement calculators estimate the need for 70% to 80% of preretirement income. But according to a survey by Cogent Research in 2007 for Sun Life Financial (see Exhibit 2), many retirees underestimate the income needed to maintain their standard of living. The older the retiree, the greater the underestimation of needs. Also not calculated is the impact of risk, such as the considerable cost of long-term care. Also, younger taxpayers don’t necessarily have higher tax rates than later in life, because they generally don’t earn as much as in middle age. 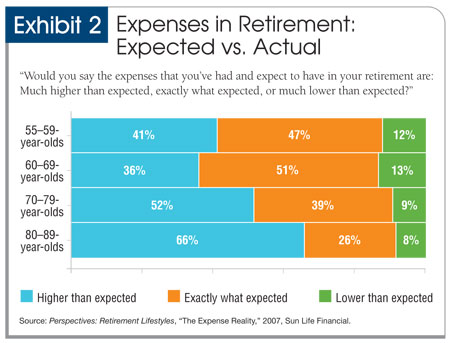 LESS-APPARENT BENEFITS OF A ROTH CONVERSION

Besides the lack of an AGI ceiling and deferral and spreading of distribution recognition of a Roth conversion in 2010, other, less-well-known attractive features include:

Any retirement account is eligible. Under provisions introduced by the Pension Protection Act of 2006, rollovers and transfers to a Roth account may be made from any qualified retirement account, including 401(k) and 403(b) plans. Previously, only transfers from IRA accounts were permitted.

Self-directed, higher-growth investments. Some investment strategies involve the placement of capital with no or low dividends in exchange for high future growth. Private equities and nontraded growth and developmental or value-added real estate trusts fit this strategy. The opportunity to invest capital that, while it is after-tax, can seek higher, tax-free growth is the Holy Grail for moderately aggressive to aggressive investors. Again, younger taxpayers with a longer time horizon who currently pay a lower marginal tax rate are good candidates for this strategy, as are wealthy families seeking to grow the estate for heirs or charity.

Leaving a tax-free legacy. Many taxpayers hate paying income tax—even after they’re dead. The tax-free status of a Roth IRA can extend far into the future if the surviving spouse names a young grandchild or great-grandchild as the beneficiary.

Getting children involved. Tucked inside the list of ideal conversion candidates are those who don’t need to draw income from retirement accounts and have a lower marginal tax rate than their grown children. In this instance, it is in the best interest of the children to help their parents pay the income tax on the conversion. Since the children will receive the Roth proceeds income tax-free at the death of their parents, they are thus able in effect to pay a lower tax rate today for a larger tax-free benefit in the future. Gifting rules and proper beneficiary designation should be considered.

For many taxpayers, 2010 may indeed be the Year of the Roth Conversion. CPAs and financial planners can balance the decision-making process with clients’ current financial condition and tolerance and capacity for risk, financial planning objectives and time horizon. Now that 2010 has arrived, most clients have heard about this opportunity, but many are still unsure whether it is suitable for their circumstances. Certainly, the strategy is worth a thoughtful exploration.

IRC § 408A(d)(6) allows taxpayers to recharacterize within six months of the tax year’s return due date (without extensions) a contribution to a traditional or Roth IRA, including “reversing” a traditional-to-Roth conversion. In golfing terms, the IRS allows the taxpayer to “take a Mulligan.” Why, after all this effort, would someone wish to recharacterize a conversion? A typical reason would be a decline in the value of the Roth account, making the tax bill more, relative to that value, than the client wants to pay. For example, a calendar-year taxpayer converted a $100,000 IRA to a Roth IRA before April 15. A year later, the Roth IRA was worth only $25,000. Without a recharacterization, the client will pay income tax on $75,000 of value that no longer exists. If the conversion is recharacterized before the Oct. 15 deadline (assuming an April 15 return due date), the tax bill on the $100,000 conversion is erased. The recharacterization must be done as a trustee-to-trustee transfer, which the taxpayer must elect by notifying the trustees of both IRAs of the amount and type of contribution being recharacterized. It’s worth noting that recharacterization of a contribution—or conversion to a Roth IRA, for that matter—is not an all-or-nothing proposition.

Converting a traditional IRA to a Roth IRA may be an attractive option at any time, but it is especially likely to result in tax advantages if done in 2010, since recognition of income resulting from the conversion may be deferred and spread over tax years 2011 and 2012.

The likeliest candidates for tax savings from a Roth IRA conversion are high-income taxpayers, who can best benefitfrom the account’s tax-free inheritability and the removal of adjusted gross income restrictions on conversion for 2010. The advantage of tax-deferred plans presupposes retirees will have a lower tax rate than when working; however, this assumption is questionable, given the prevalence of retirees who report needing greater income in retirement than they expected.

The use of the strategy can be a gateway to other planning and investment strategies for taxpayers and beneficiaries.

A Roth IRA generally offers advantages of greater taxpayer control over distributions. Contributions may be withdrawn at any time without tax or penalty, and earnings may be withdrawn without tax or penalty if the taxpayer is at least age 59½ and has held the Roth account for at least five years. Also, unlike a traditional IRA, a Roth IRA has no required minimum distributions, and taxpayers may contribute to it after age 70½.

Other, less-apparent features of Roth IRAs that could make conversion a more attractive option include that 401(k) and 403(b) plans may now be converted and that their tax-free status can be inherited.

To access courses, go to aicpalearning.org and click on “On-Site Training” then search by “Acronym Index.” If you need assistance, please contact a training representative at 800-634-6780 (option 1).

Membership in the Personal Financial Planning (PFP) Section provides access to specialized resources in the area of personal financial planning, including complimentary access to Forefield Advisor. Visit the PFP Center at aicpa.org/PFP. Members with a specialization in personal financial planning may be interested in applying for the Personal Financial Specialist (PFS) credential. Information about the PFS credential is also available at aicpa.org/PFP.