How to Stop, or At Least Make Less Annoying, Requests for Permission to Add or Change Software

Q: When I upgraded to Windows 7, I thought I wasn’t going to get any more of those little Microsoft messages that dim the screen and freeze the computer until I either approve or reject my effort to make a change in the operating system or to add some software. Alas, those annoying bulletins still pop up from time to time. Is there some way to stop them?

A: Yes, those User Account Control (UAC) dialog boxes can be annoying, but so are your car’s seat belts. Both are designed to protect us from serious injury. UACs alert you to attempts to make changes to your computer or to Windows settings that require administrator-level permission. Unlike seat belts, however, computer users can opt to disable the alerts completely or partially.

In general, it’s best not to tinker with the UAC settings. However, if you generally don’t install new software and only visit familiar websites, you can safely modify UACs to be less intrusive.

To access the settings, either go to Control Panel, User Accounts or click on Start and type UAC in the search box (see screenshot below). 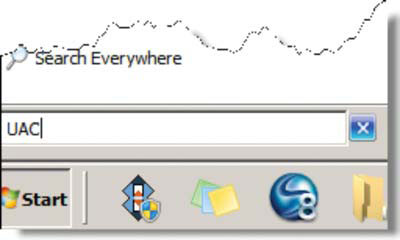 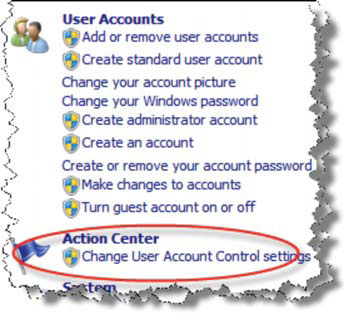 That will bring up the User Account Control Settings screen, which contains a slider you can set at any of four settings (see screenshot below). 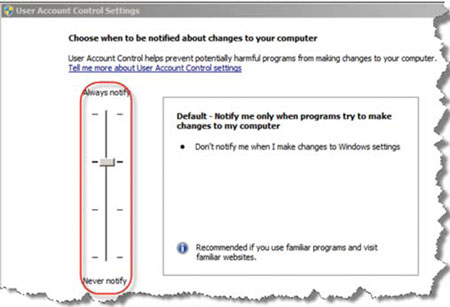 The top setting, under Always notify, provides the most security—and the most annoyances. Every time you or an outside program seeks to make a change in your computer, your screen will dim, and you will be asked if you approve the change (see screenshot below). 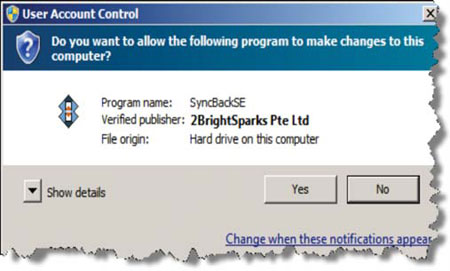 The default position, one step down, is less intrusive. It should be used if you run familiar programs and visit familiar websites.

The third stop from the top of the sliding scale is similar to the second stop and should only be selected if it takes a long time to dim the screen.

The lowest (fourth) position is the most risky and should only be used by experienced computer technicians because it never notifies you and does not seek permission when changes are trying to be made on your computer.

Caveat: As powerful as UAC is, the function does contain a potential enemy that threatens its effectiveness—and that enemy, as the “Pogo” cartoon has immortalized, is us. Since a user has to decide whether to approve or reject all actions that affect the operating system, how many of us are technically able to even recognize whether a proposed change, often described in some mysterious code, is safe? As it turns out, most users just assume it’s safe and click on Yes. Even worse, after a while most users just click on Yes as a matter of habit, not even bothering to try to decipher the message.

Is there a practical defense against this problem, which drastically limits the effectiveness of UACs? There are none that I’m aware of. On balance, the limitations notwithstanding, I suggest users continue wearing UAC seat belts.