Determining overall group materiality and materiality levels for individual components is becoming more of a hot-button issue as the number and complexity of large and international group audits increases. Auditing standards and other professional materials offer little practical guidance on the topic.

Internal and peer reviews and regulatory inspections have revealed a variety of approaches in this area. In some instances, reviews have discovered potentially troubling practices. Our conversations with regulators and practitioners indicate an intense and growing interest in the development of conceptually sound guidance. This article outlines a practical approach that group engagement partners can consider in establishing or evaluating component materiality.

GUIDANCE IN THE AUDITING STANDARDS
A group audit is performed on an entity with multiple locations or components, such as subsidiaries, with separately audited financial information included in consolidated or group financial statements. To properly plan the nature and extent of audit procedures for the group audit, the group engagement partner, who is the lead auditor for the consolidated entity, must determine group overall materiality and establish or approve appropriate materiality levels for the individual components. The component materiality level helps guide the component auditors in planning and performing audit procedures to achieve the desired level of audit risk at each component such that the group auditor achieves the desired level of group overall audit risk on the consolidated financial statements.

U.S. auditing standards (AU section 312 and PCAOB’s Auditing Standard no. 5, paragraphs B10–B16 of Appendix B) provide a list of factors to consider in determining the extent of testing on a multicomponent audit. However, these standards don’t provide specific practical guidance on establishing componentlevel planning materiality, one of the principal factors used to determine the extent of testing.

Conversely, allocating an arithmetic portion—a simple proportion—of group overall materiality would generally result in over-auditing because the achieved audit risk at the group level would be extremely low.

While ISA 600 implies it is appropriate for group engagement partners to avoid the extreme endpoints of the continuum shown in Exhibit 1, it does not spell out how to determine a reasonable and justifiable level of aggregate component materiality between these two extremes. 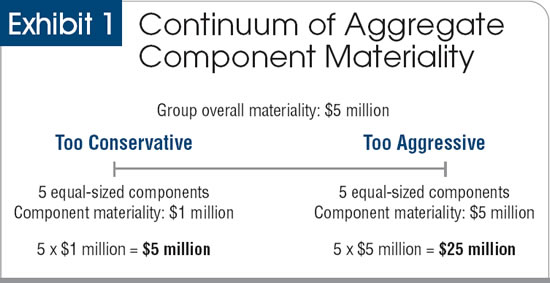 The multiples derived from the model to determine the maximum aggregate component materiality (MACM) are presented in Exhibit 2. We refer to these MACM multiples as benchmark multiples.

Our set of benchmark multiples assumes that the group engagement partner has used appropriate professional judgment to determine the number of significant components to which MACM will be allocated, including removing any insignificant components that are immaterial in aggregate and that are of sufficiently low risk (in accordance with ISA 600, paragraphs A50–A53).

Returning to our example of a group audit with five components, applying the benchmark multiple of 2.5 to group overall materiality of $5 million yields an MACM of $12.5 million—a reasonable upper bound available for allocation to the components. See the sidebar, “Approaches for Allocating MACM,” for additional examples using the benchmark multiples to calculate MACM. 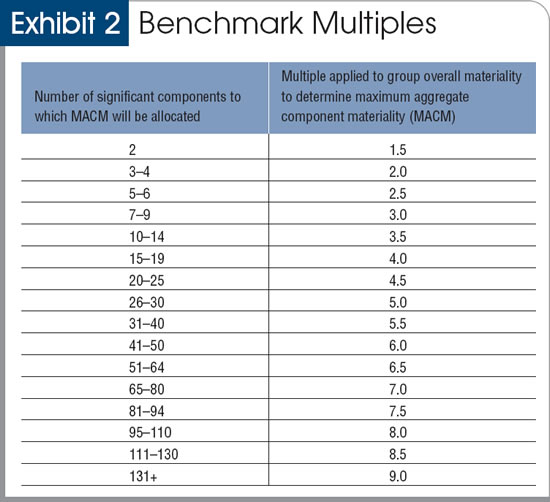 ADDITIONAL GUIDELINES FOR ESTABLISHING COMPONENT MATERIALITY
Now that we have determined a reasonable level of aggregate component materiality, the question becomes how to allocate this amount to components. In practice, it’s common for the component materiality levels to vary due to differing component sizes, statutory audit requirements, risk characteristics and country-specific guidelines. The group engagement partner allocates the MACM to the significant components using either proportional or weighted allocation techniques.

When there are different-sized components or required limits on the amount of materiality that can be allocated to some components, as in statutory audits, the following guidelines help ensure that the allocation achieves the desired level of audit risk at the group level:


While the approach we suggest will help inform the group engagement partner’s judgment, we stress that because of the complexity and subjectivity of the variables involved, no single “correct” or “optimal” solution is possible. Auditors should apply appropriate professional judgment and follow local standards when establishing the materiality allocation for each component.

These examples allocate MACM to components based on revenues; other financial bases could also be used. 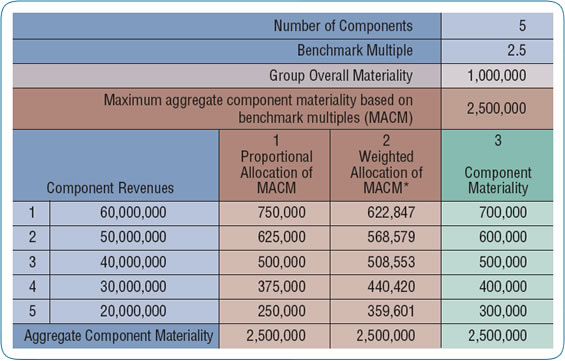 In this example, the group engagement partner multiplies the benchmark multiple of 2.5 (the multiple pertaining to five components—see Exhibit 2) by the group overall materiality of $1 million to determine the maximum aggregate component materiality, which is $2.5 million. 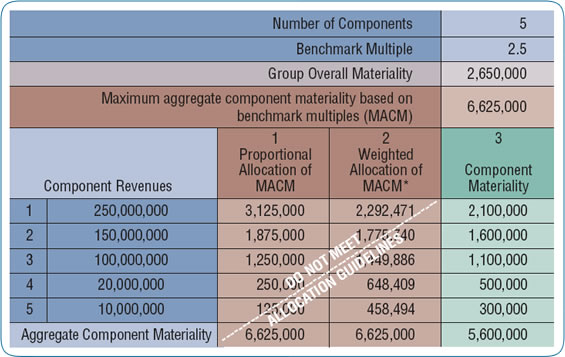 Regulator inspections and firms’ quality reviews have revealed a variety of methods used by group engagement partners in determining component materiality and have identified potentially troubling matters with some of the current approaches.

International Auditing Standard (IAS) no. 600, Special Considerations—Audits of Group Financial Statements (Including the Work of Component Auditors), defines a continuum of materiality amounts that conceivably could be allocated to components. A reasonable, practical approach is allocating overall materiality to components while avoiding the extremes of the continuum.

Steven M. Glover, CPA, Ph.D., and Douglas F. Prawitt, CPA, Ph.D., are professors of accounting at Brigham Young University. Prawitt is also a member of the Auditing Standards Board. Their e-mail addresses, respectively, are glover@byu.edu and prawitt@byu.edu. Jonathan T. Liljegren is a recent graduate of Brigham Young University. He works for PricewaterhouseCoopers in the Washington, D.C., Metro office. His e-mail address is jonathan.liljegren@byu.net. William F. Messier Jr., CPA, DBA, is a professor of accounting at the University of Nevada–Las Vegas. His e-mail address is bill.messier@unlv.edu. He is a former ASB member.