Caution: AutoRecover Is Not An Automatic Save Function

After I spent an hour working on a Word document, I had a power failure and the computer closed down. But when I got it running again and opened the file, all my new work was missing. I don’t get it. I have autosave enabled and it didn’t do its job. What’s going on here?

You’re making a common mistake. You’re confusing autosave with AutoRecover . Word does not have an autosave function. What it has is AutoRecover , which periodically saves open documents into a temporary file in the event the original file becomes corrupt or Word malfunctions. Then, when you try to open that file, Word launches a Document Recovery Task box (see screenshot below) in which you’re invited to restore one of the several saved AutoRecover temporary files. In your frustration at not finding your work you may not have noticed the box, which typically appears on the left-hand side of the screen. 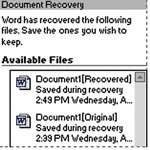 To set up AutoRecover , click on Tools , Options and the Save tab. You can program it to save as frequently as once a minute (see screenshot below).

But more important, I suggest you get into what I call the Ctrl+S habit. Those simple keystrokes save what’s on your screen—and that works for any Office application. I do a Ctrl+S every few minutes, and especially when I make a major change or addition or I temporarily leave the work.

By the way there is software, called AutoSave, ( www.atopsoft.com/products/autosave ) that you can program to perform the Ctrl+S command. The $20 product works on all Microsoft Office applications.

Supercharge your audit process with AI

Auditors today can employ AI to automate tedious tasks and gain far greater insights from their clients’ information. This free report lays out a five-step process for implementing AI and shows ways AI can add value to the auditing process.