ne weapon against fraud is simply to speak to people and observe their behaviors as you do so—something CPAs traditionally do during an audit. But when auditors and managers try to see into the gray world of wrongdoing and fraudulent financial reporting, normal interviewing skills may not be up to the task of determining whether someone is withholding information, shading the truth or outright lying. As with any audit procedure, it’s best to learn fraud-based interview skills before you need them on an engagement. Although not a comprehensive guide to in-depth forensic interviewing, this article can help auditors conduct focused discussions with clients, managers and employees to obtain additional information when suspicions become aroused. Such conversations may point to hidden problems, suggest where more investigation is warranted and possibly uncover deception.

START WITH THE STANDARDS
Statement of Auditing Standards (SAS) no. 1, Responsibilities and Functions of the Independent Auditor, says, “The auditor has responsibility to plan and perform the audit to obtain reasonable assurance about whether the financial statements are free of material misstatement, whether caused by error or fraud.” SAS no. 99, Consideration of Fraud in a Financial Statement Audit, reiterates that concept and places a heavy emphasis on making inquiries. Paragraphs 20 through 26 list questions CPAs should ask management and others in checking for fraud risk.

Paragraph 27 is clear: “The auditor should be aware when evaluating management’s responses to inquiries…that management is often in the best position to perpetrate fraud.” Indeed, therein lies the challenge: Some people in positions of trust commit wrongdoing, and those committing wrongful acts and fraud can—and do—lie to auditors and/or managers.

WHEN SHOULD A NORMAL INTERVIEW BE MORE?
Imagine that audit interview skills form a continuum, with beginner skills at one end and forensic interview experience at the other. The fraud-based interview falls between those extremes.

At an early stage of the audit, auditors seek background information on an entity’s systems, procedures and controls. They may base queries on checklists or transaction flowcharts and ask clients and employees questions that require a simple “yes” or “no,” such as, “Do you reconcile the bank statement promptly at the end of each month?” Answers help establish the record of procedures a client claims to use and normally are validated by other information. At the other end of the skills scale, the forensic interviewer, experienced at designing and conducting interviews, tries to get subjects to reveal information they are attempting to shade or withhold.

A fraud-based interview comes after the auditor has identified problems and needs to clarify their cause and quantify their impact. It presupposes the subject has important information and possibly may be misleading the questioner or lying. In general, two types of subjects are of interest: people who are suspected of committing fraud and those who may have knowledge of wrongdoing but aren’t involved in perpetrating it. The second group often is a good source of information.

SORT TRUTH FROM FICTION
Fraud-risk indications may be present in documents, reports, exception statistics and behaviors, and there are many effective discovery-based tests auditors can perform, including large sample sizes, computer-assisted audit techniques, observation, analysis and other cross-checks. Fraud-based interviews supplement rather than replace those steps.

People who commit financial reporting fraud or misappropriation usually create plausible cover stories by blending elements of truth with fiction. They rely heavily on two tools: deceptive statements and falsified documents. People committing a fraud will lie, bend the truth, withhold or hide information and documents, and otherwise act to confuse, delay or block the path of the auditor—that’s why deeper questioning is called for. Potentially fraudulent documents aren’t really part of this discussion, although you might use them during an interview.

Fraud-based interviews are a good idea when the auditor

Notes an important exception and cannot rule out wrongdoing as a cause. The auditor who tests exceptions and concludes they are not a result of error crosses a threshold—from performing a financial statement, controls or operational audit to early-stage fraud investigation.

Wants to follow up a routine discussion of procedures and controls. Auditors in organizations all over the world discuss and cross-check internal controls hundreds of times each day. Sarbanes-Oxley has intensified this compliance process for both internal and external auditors.

Suspects an interview response is fishy. For example, the subject gives answers that conflict with known information, attempts to direct the questioning away from a sensitive area or topic, or changes his attitude or cooperation level in response to certain questions. The subject also might suddenly avert his eyes, make hand or other movements or change posture, facial expression or speech patterns. Don’t overreact to a discrepancy between body language and what a subject says, but do take the time to question more deeply.

Gets a tip that possible wrongdoing has occurred. A fraud-based interview can help confirm or disprove it.

UNCOVERING VERBAL DECEPTION
Lying is a learned skill for most people, who generally have little knowledge of how to lie and are uncomfortable doing so. Altered or fraudulent documents can tell a false story dispassionately, but “on the fly” responses to a prepared auditor’s questions often will trip up fraudsters by getting them to reveal more than they intend—which is exactly the point of an interview.

The following suggestions can help auditors plan a fraud-based interview:

Organize, organize, organize. Anticipate obstacles and resistance and plan the entire interview in depth: opening comments, the body of the discussion, the introduction of documents into the interview and a closing strategy. Proceed logically through the time line, transaction flow and steps taken.

Move from the general ( “Tell me about…” ) to the specific ( Who, what, where, when, why, how? ). Start with nonsensitive issues; ask questions to which you know the answer before proceeding to questions to which you don’t. Ask the subject for the basis of any conclusions he or she expresses. Actively listen, both with your ears and with your eyes. If a verbal response and visual clues differ, probe deeper. Keep personal reactions, judgments, disagreements or suspicions to yourself unless expressing them is an intentional part of the interview plan. Above all, keep the interview on track. 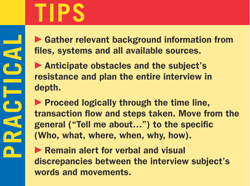 Structure the interview. Plan the three main phases of an interview. In the opening, make introductions, establish rapport, provide background information and observe. Develop your baseline for gauging the interview subject’s veracity from observing his or her responses to questions to which you know the answers. In the middle (core) of the interview obtain information, asking the “Who, what, where, when, how, why?” questions. At the closing, confirm your understanding, reiterate key facts and agree on next steps, including suggestions about others to interview.

Use scripted questions if you need to. Many auditors prefer to work from a script, which will vary in formality with their experience and the specific situation. Simple bullet-point questions plus opening and closing remarks constitute an informal script. It’s important to establish and maintain rapport with a subject, so if a script feels awkward and you think it will inhibit free-flowing dialogue, practice first. Interviewers of all experience levels occasionally forget crucial questions in the heat of the moment. Use the script to support the purpose and tone of the interview and to make sure you cover all important items.

Scripts also serve as a prop. They give the subject the clear impression that you are organized, prepared and focused on being thorough.

Use silence to your advantage. A long period of silence after a question has been answered, or during the time it takes the interviewer to record the answer, creates a vacuum that people tend to want to fill. That tension may provoke a subject to reveal cues that he or she is lying or withholding information. Quiet periods also give the interviewer an opportunity to assess the progress of the interview and change an upcoming question as needed.

Draw out additional details. Use questions or statements that elicit details such as

“Can you walk me through an example?”

Anticipate what might go wrong. Things rarely go as expected. Be prepared in advance to react. Make a list of things that could go wrong, and think through the actions you should or should not take in response to each possibility.

Control the discussion. Audits often expose problems and other issues and create a need for corrective action, so even routine financial statement audit procedures can be stressful to both auditor and client. When you actively probe for the cause of fraud indicators, your questions may peel away layers of fabrication and expose the truth. Be prepared for subjects to react with an abusive outburst attacking your qualifications, competence, integrity or some other feature. Don’t let it detract from the task at hand.

Deal with reluctance. When sensitive issues come up, many interview subjects are reluctant to cooperate. This may be based on legitimate concerns about how much they should reveal to an auditor, fear of recrimination or disapproval for saying too much, cultural norms and business etiquette or even faulty memories. As much as possible, convey an attitude of cooperation. Use an interested, sympathetic tone in questioning and listening.

Take notes. Jotting down notes during the interview helps ensure accuracy, but be careful not to discourage rapport with the interview subject. If you’re using a formal script, note taking should not interfere with your ability to observe visual cues that might suggest another line of investigation.

Be direct. Often the interview subject is an important executive or client representative. Auditors should be appropriately circumspect about the lasting impression the interview can create, but balance that against the need to get to the truth. Occasionally it may be necessary to ask a direct and potentially unsettling question, for example, “Do you know of any dishonest or fraudulent activity?” Be prepared to read the answer with both your ears and your eyes.

DOES THAT ANSWER THE QUESTION?
A well-planned audit interview is an important way to gather and confirm operating data, answer questions, influence behavior and lay the groundwork for presenting findings and recommendations. Professional standards require CPAs to sharpen their skills to increase the likelihood of uncovering fraud if it exists.

You are more likely to discover fraud if you use these two simple steps:

Know what type of fraud can occur in the subject area you’re looking into and describe to yourself what those fraudulent acts might look like.

Look carefully; that is, consciously employ discovery-based steps to uncover signs of fraud in documents, reports, exception statistics and behaviors. Besides using the many effective tests for auditing transactions and balances, enhance your likelihood of uncovering hidden issues by improving your interview techniques. The systematic use of a written script, long pauses between questions and attention to pacing all contribute to a successful outcome.

An audit seeks to verify a record of transactions and Sarbanes-Oxley has put more responsibility than ever on auditors’ shoulders. If questioning points to potential criminality consider bringing in forensic interview specialists. The truth isn’t “multiple choice.”