How hide-and-seek becomes a game for auditors.

oney laundering is so widespread CPAs are likely to encounter it at some point in their work. It is an essential element of the “underground economy,” which, worldwide, amounts to trillions of dollars. An independent auditor’s responsibilities in the area of money laundering, because it is a criminal act, are governed by Statement on Auditing Standards no. 54, Illegal Acts by Clients, which requires CPAs to be familiar with the types of illegal behaviors that could have a direct and material impact on financial statements. The new fraud standard, SAS no. 99, Consideration of Fraud in Financial Statements, requires independent auditors to assess the risk that fraud could materially misstate the financials.

Eddie Antar, the president and CEO of Crazy Eddie’s Electronics, a nationwide chain, and architect of a classic money-laundering scheme recounted here, shared a common problem with everyone else who has ever accumulated illegal loot: where to hide it. In this article CPAs will learn the basics of money laundering—what it is, how it is accomplished, ways to detect it and how thieves hide the money.

In money laundering the fraudster disguises the existence, nature, source, ownership, location and disposition of property derived from criminal activity. Currency is a popular commodity in criminal activity; it is fungible—one dollar looks just like another—and further loses its identity when entering the economic stream. The downside is that currency is bulky and vulnerable to discovery, especially with today’s heightened security. Also, the launderer is hardly in a position to complain to the authorities if it is stolen.

The trick for money launderers—from dishonest businessmen to the drug kingpins—is to deposit currency into financial institutions without drawing attention. If they succeed at this, they greatly reduce their chances of being discovered and can use the money for a variety of purposes. If, on the other hand, alert CPAs recognize the signs of criminal activity, their plans will be foiled.

LEGITIMATE BUSINESS/ILLEGAL MONEY
Fraudsters use two methods to launder funds in a legitimate business. Overstatement of reported revenues means that illegal money is mixed with legitimate money, thereby boosting total revenues. The downside of this method is the perpetrator must pay taxes on the money. To avoid this, many launderers make extra payments to themselves in the form of disguised consulting fees, salaries and the like. Balance sheet laundering occurs when the thief parks the money in the company bank account. The problem with this method is that it is easily detected; the company bank accounts would be overstated by the same amount when compared with the financial statements. However, balance-sheet laundering provides one major benefit to the miscreant: The illegal loot is safely locked away in a bank.

White-collar professionals sometimes are used to help launder money. Through investments, trust accounts, funds transfers and tax avoidance schemes, these professionals can manipulate the financial, commercial and legal systems to conceal the origin and ownership of assets. CPAs should be especially alert to offshore transactions that appear to have little economic substance. Additionally, since money launderers gravitate toward a small cadre of lawyers and brokers to accomplish their illegal goals, be wary of professionals with questionable reputations.

Money laundering is a three-step process of placement, layering and integration that is clearly illustrated in Crazy Eddie’s scheme.

A CASE STUDY
Eddie Antar, one of the most shameless white-collar criminals in the last half of the 20th century, limped onto his latest of many flights from New York to Tel Aviv, Israel. Stiff and unable to bend, he could barely maneuver into his first-class seat for the 10-hour ride. Other passengers probably thought Antar was crippled. The flight attendants were particularly attentive to his needs. 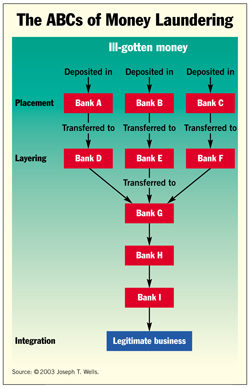 The process of depositing the laundered money in banks is called placement and can be accomplished in several ways. The simplest method is to add the currency to the revenues of a cash-intensive business. But another way is to move the currency offshore, as in Antar’s case. Although some nations and islands have reputations as havens, having money in nearly any foreign country greatly complicates tracing it. And that’s exactly what the money launderer wants. Other popular hiding methods include breaking the money into smaller quantities in order to evade U.S. banking requirements that require currency transactions over $10,000 be reported to the Treasury Department. The smaller sums then can be deposited in a variety of banks; this is known as smurfing . Currency can be used to purchase cashier’s checks and money orders that can be deposited into other institutions. A sophisticated laundering operation sometimes involves hundreds of banks. CPAs should be alert to businesses that have a questionable rationale for using multiple bank accounts.

Layering. Once Antar’s Israeli bank balance was swollen with cash, he came up with a way to dodge the scrutiny of Israeli officials should they inquire on their own or on behalf of American investigators. The money was wire transferred to a bank in Panama, a country then known for its secrecy laws.

From there Antar could transfer the money by wire or by check to any bank of his choosing in the world. The more transfers he made, the more layers he put between himself and the original source of the illicit funds—hence the term layering . A sophisticated laundering operation could have hundreds of layers.

Integration. Eddie Antar eventually wired more than $8 million to Panama from his Israeli bank. He then gradually transferred the funds to the accounts of Crazy Eddie’s Inc., where they were mixed with legitimate sales. This is the process of integration , where ill-gotten gain is returned to the economy disguised as legitimate income.

When Antar returned the money as sales to Crazy Eddie’s, the $8 million of skimmed money boosted the stock price and created more than $40 million in added equity for the Antar clan. Antar later cashed out his shares and left the United States with more than $30 million. Authorities finally caught up with the international fugitive and returned him to the United States, where he served eight years in prison.

JOSEPH T. WELLS, CPA, CFE, is founder and chairman of the Association of Certified Fraud Examiners and professor of fraud examination at the University of Texas at Austin. Mr. Wells won the Lawler Award for the best JofA article in 2000 and 2002 and has been inducted into the Journal of Accountancy Hall of Fame. His e-mail address is joe@cfenet.com .