What You Should Know About Defragging Your Hard Drive

WHAT YOU SHOULD KNOW ABOUT DEFRAGGING YOUR HARD DRIVE
Q. I know I’m suppose to defrag my hard drive every now and then so it runs more efficiently. But every time I start a defrag, the function runs for a few minutes, stops and then starts all over again. I also get a message that says, “Drive contents changed.” I even once let it run overnight, and when I returned to the office the next morning, it was still trying to finish the job. What can I do?

A. Let me first congratulate you for even trying to defrag your hard drive. Defragging is like flossing after every meal: We know we should for good dental hygiene, but most people can’t be bothered. And that’s too bad because failing to defrag a computer regularly makes the computer drag—running slower and slower as time goes on.

Before I tell you how to overcome your problem, which isn’t unique, I’d like to explain what defragging is and why it’s important to do on a regular basis.

Defrag is short for defragmentation. Every file on a hard disk (or any storage device) is made up of tiny bits of data, and each time a file is saved, many of the bits get scattered to different parts of the disk, settling in the nearest vacant space. Thus, bits of data for a single file may be widely separated. Fortunately, the computer keeps track of each bit’s location, and when you call up a file, it gathers them all together.

But with each saving, the component bits get scattered more widely, and the computer has to work harder each time to locate the various bits and then reassemble them.

That’s where defrag comes in. When a tool that’s built into Windows, called a Disk Defragmenter , is evoked, it scans the hard drive, locates all the scattered bits and repositions them so all the bits of each file are situated as close to each other as possible. Defragging is a never-ending job—like flossing your teeth. The more you use a computer, the more frequently you need to defrag.

For most machines, a weekly defrag is sufficient. While you can launch the defrag tool manually, Windows comes with scheduling tools that let you automate the event; most people schedule it for after-office hours.

Now, to answer your question about the application stalling and restarting. I would guess that defrag stalls in your computer because, in all likelihood, you have some application intermittently running in the background, and each time it stops, its data get scattered. Imagine trying to line up a bunch of hyperactive kids by height: It’s like trying to load frogs in a wheelbarrow. And each time the position of the data changes, defrag senses that and has to stop and start all over again.

To keep the data from scattering, you have to stop the program from starting. But you don’t want to permanently stop it because it could be an antivirus program or some other vital application.

The easiest way to temporarily stop it is to use what’s called a three-finger reboot or a hot reboot: You do this by holding down the Ctrl and Alt keys simultaneously and then pressing the Delete key. But be careful—do this only once. If you do it twice, your computer will reboot.

What you want to do by commanding the first step of the hot reboot is to evoke a Close Program screen that lists all the programs running in the background. By highlighting each application and then clicking on the End Task —one after the other—you can temporarily halt those apps from running. Be careful not to press the Shut Down key; that will reboot the computer. Also, never close two programs in the Close Program list: Explorer and Systray. 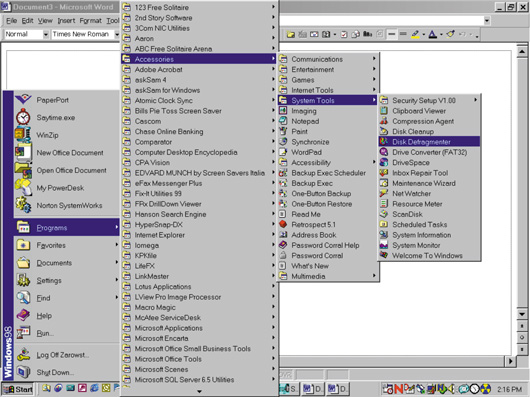