Why some CPAs bring their dogs to the office

Dogs can add stress relief, joy, and companionship at work.

Teddy, Winston, Louis, Auggie, Baxter, Darby, Jonnah, Toby, Roxy, and Hennessey have a lot in common: Not only are they charming canines, but they also spend their days at public accounting firms with their beloved CPA humans. The dogs bring joy to office staffs, and they help reduce tension for clients, many of whom visit the offices during nerve-wracking tax time.

According to a 2016 study by Banfield Pet Hospital, pet-friendly workplaces offer several benefits, including boosting employee morale, reducing employee stress, and providing employers a competitive edge when recruiting. While canine mascots don’t fit with all professions, public accounting sometimes gives its members flexibility to bring their dogs to the office—as long as the dogs have the right temperament and firm owners and clients don’t mind. In advance of Take Your Dog to Work Day on June 23, we asked several CPAs why they bring their dogs to work, and how these four-legged friends impact their offices. Here are their stories: 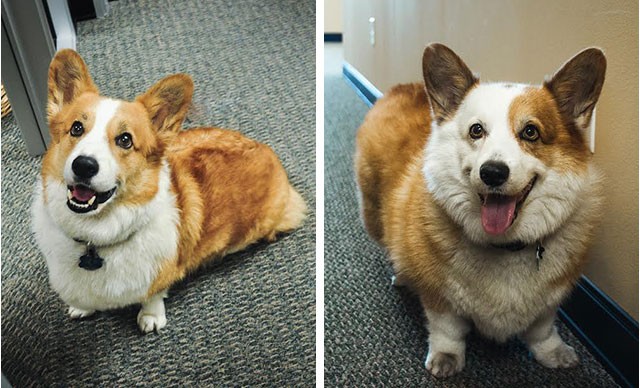 Teddy and Winston. These two spirited Pembroke Welsh corgis spend their days at Mark S. Varshawsky & Associates, a public accounting firm in Camarillo, Calif. Varshawsky, CPA, a sole proprietor, began bringing them to work years ago, since they are part of the family. When he found an office space, he insisted that allowing dogs be written into the lease, and Teddy and Winston are featured on his website. Pets, he said, provide good therapy—and valuable services. Teddy, age 9, and Winston, 8, clean up the lunchroom floor, Varshawsky said, and staff members love them. 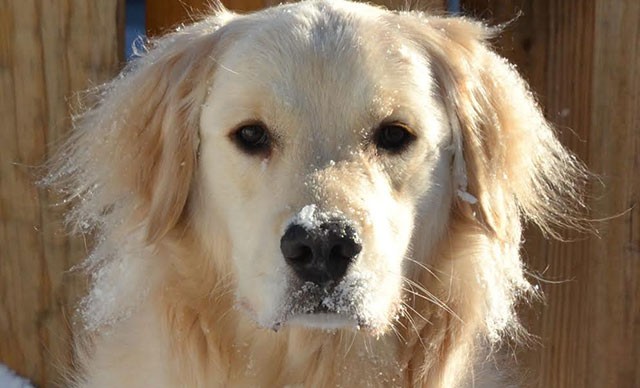 Auggie. Gary Brinster, CPA, managing partner at Brinster & Bergman LLP, in Rockville Centre, N.Y., and his wife, Colleen, a firm administrator, started bringing Auggie to work when the golden retriever was just a pup. Auggie is now 6 years old and featured on the firm’s website and in its logo, and the firm has reeled in clients because of him. “He calms everybody down,” Brinster said. “If you’re having a bad day, you can sit on the floor and pet him for a while. He won’t object at all.” Auggie also helps “break the ice with new people,” and is a conversation starter. Subtenants in the firm’s office suite even call him over the intercom, beckoning Auggie to the conference room for lunch, Colleen Brinster added. “He hears this and takes off running.” 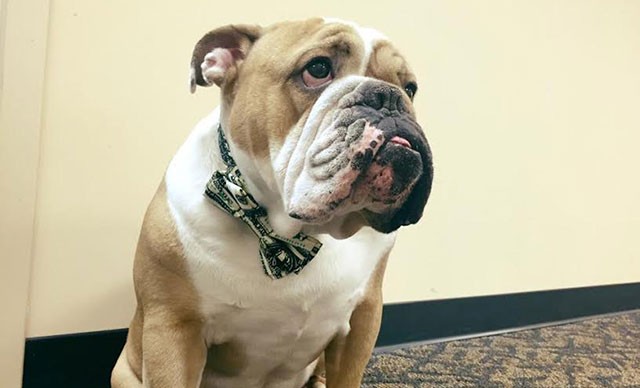 Louis. Stephen and Barbara Merritt, both CPAs at Stephen Merritt, CPA, P.C., in Virginia Beach, Va., are proud owners of Louis, a 4-year-old, 65-pound English bulldog who has held the “office mascot” title since 2013. “Louie,” as they call him, has his own wardrobe and stash of toys in the office, but he’s best known for his mellow temperament, comedic nature, and pouting face. He acts as a therapy dog for clients, resting his head on their laps when they feel tense. Thanks in large part to Louie, the Merritts’ office “is running better now than it ever has,” Barbara Merritt said. 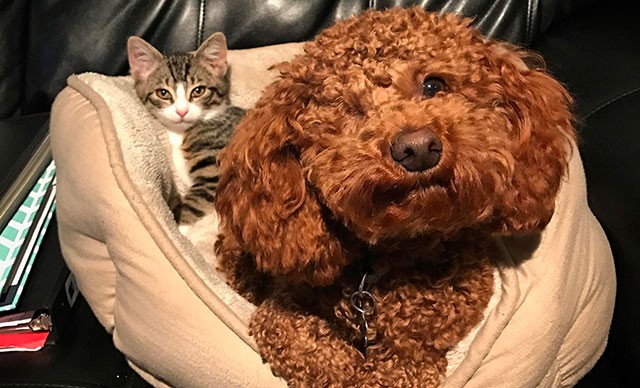 Hennessey. Steven Zaroogian, CPA, managing partner at Markarian & Meehan Ltd., in Wakefield, R.I., brings Hennessey, a 2 1/2-year-old, rescued, one-eyed toy poodle, to work several times monthly, even though the dog is technically owned by his daughter. The firm, with 10 CPAs, allows employees to bring their dogs on the weekends. “During tax season, it seems natural to bring him in,” Zaroogian said. “He likes it here.” Hennessey notifies Zaroogian when someone comes to his office, and the poodle helps appease staff and clients. Hennessey also has his own page on the firm’s website and, in his spare time, visits patients at a local nursing home. 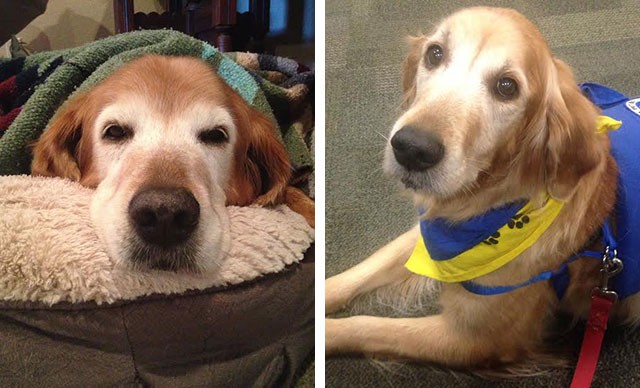 Toby and Jonnah. Kenneth Haldeman, CPA, owner of KJH Accounting and Tax Services, a small accounting firm in Iowa City, Iowa, has brought his mother-and-daughter golden retrievers, Toby, 13, and Jonnah, 11, to work since they were puppies. “If you don’t like dogs, you don’t come here,” he said. The dogs’ demands for attention help clients relax, and they alert the office to incoming patrons. “The clients love them,” Haldeman said. “It humanizes the whole office, and makes everything seem more natural and less formal.” 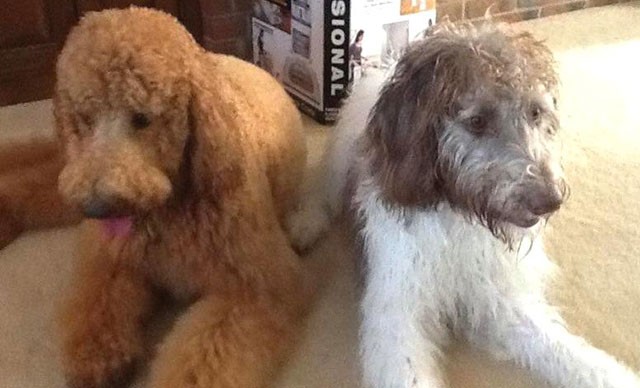 Baxter and Darby. Clients often stop by specifically to visit Baxter and Darby, two male Labradoodles, at Sherman, Spero, Safarino & Co., in Virginia Beach. The pair of curly-coated canines, owned by shareholder Barry Cheatham, CPA, have graced the office since they were puppies. The firm’s former owner loved dogs and allowed the pups in, and they soon became part of the team, Cheatham said. Baxter is a mellow, 6-year-old therapy dog who visits nursing homes and schools, and Darby is a 4-year-old lovable pup who always keeps an eye on Cheatham, his trusted companion. Both dogs spend most of their time in Cheatham’s office and help keep his stress levels down.

Roxy. Robert Williams Jr., CPA, and his wife, Bunny, his bookkeeper, own their two-person firm, located on the main street in rural Hiawassee, Ga. Almost two years ago, their mobile veterinarian showed up at their door holding Roxy, a Havanese puppy who was given up by a breeder after she reacted severely to vaccines. The couple had recently lost their 15-year-old Lhasa Apso and couldn’t turn Roxy away. She became an immediate fixture in the office and has accompanied them to work ever since. “We have clients that come by just to see her,” Robert Williams said. Roxy also forces Williams to take breaks, and she is trained to signal when it is time to go out. “Right now she is looking at me,” he said during an interview for this story. “She just rang the bell.”

Cheryl Meyer is a freelance writer based in California. To comment on this article, contact Chris Baysden, senior manager of newsletters at the AICPA.