How Medicare Part B premium increases will affect your clients

Without provisions in the Bipartisan Budget Act of 2015, nearly one-third of Part B participants would have been forced to bear the cost of premium increases that would typically be shared by all.

Approximately 30% of Medicare Part B beneficiaries will see their premiums increase next year—but those hikes will be much smaller than anticipated thanks to a new law signed on Nov. 2. The even better news is that 70% of beneficiaries will not see any increases at all.

Without provisions in the Bipartisan Budget Act of 2015, P.L. 114-74, nearly one-third of Part B participants would have been forced to bear the cost of premium increases that would typically be shared by all. Financial planners have closely watched the complicated situation, which arose due to the fact that there will be no Social Security cost-of-living adjustment (COLA) in 2016 because of low inflation. Let’s take a closer look at why this was happening, why the affected recipients ended up having to pay less, and just how much it will actually cost them.

The federal government pays 75% of Part B costs, and monthly premiums paid by beneficiaries fund the remaining cost. In most years, the annual cost increase is borne by all Medicare beneficiaries. However, under a “hold harmless” provision in the law, Social Security benefits cannot be reduced below the prior-year benefits due to increasing Medicare premium costs. Because there will be no Social Security COLA for 2016, any increase in the Medicare premium (usually deducted from the beneficiary’s Social Security check) would result in a net reduction in the beneficiary’s check—which would run afoul of the hold-harmless provision.

Since 25% of Part B costs must be paid through beneficiary premiums, the hikes were set to affect only those beneficiaries who do not benefit from the hold-harmless provision. This means the increase in Part B costs would have been spread among a much smaller group—about 30% of beneficiaries.

The beneficiaries not subject to the hold-harmless provisions include:

Absent congressional action, that smaller group of beneficiaries would have seen their monthly premium rise from $104.90 to almost $160 per month. In addition, their annual Part B deductible would have risen from $147 to approximately $223. As shown below, thanks to the new law, those numbers will now be $121.80 and $166, respectively.

How the new law affects premiums

The new law provides for no increase for those who benefit from the hold-harmless provision. For those not held harmless, the 2016 Medicare Part B premiums will be: 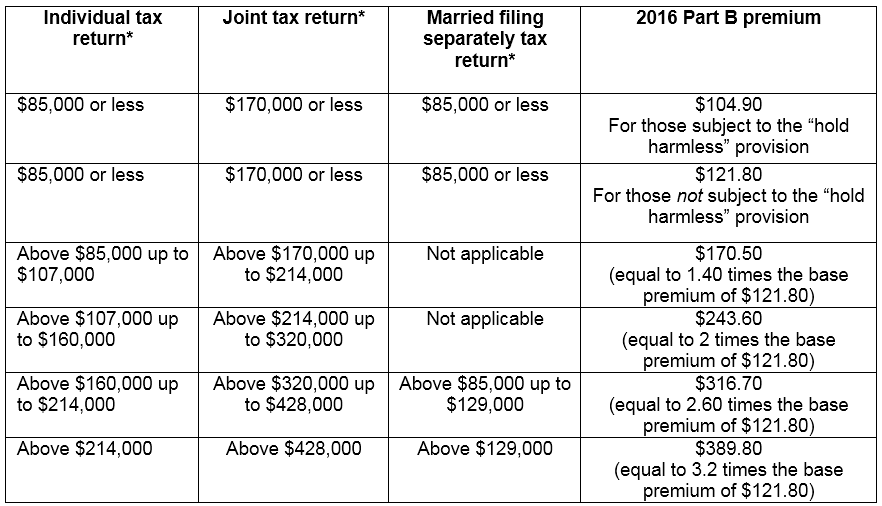 *Means tested based on 2014 modified adjusted gross income, or MAGI. Premiums include a surcharge added to pay for the cost of the reduced premium rate in 2016.

The Part B annual deductible will apply to all beneficiaries. For 2016, it will increase to $166 from $147. (Click here for more on the financial machinations required to arrive at these rates.)

What financial planners should do

Personal financial planners should use the annual announcement regarding next year’s Part B premium as well as the annual Medicare enrollment period that runs from Oct. 15 through Dec. 7 to encourage clients to review their Medicare costs and planning opportunities. While there is nothing they can do to plan around the Part B premium, they can review other aspects of their coverage to determine if savings are available:

The AICPA’s Personal Financial Planning (PFP) Section provides information, tools, advocacy, and guidance to CPAs who specialize in providing tax, retirement, estate, risk management, and investment advice to individuals and their closely held entities. PFP Section members, including Personal Financial Specialist (PFS) credential holders will benefit from Jim Sullivan’s The CPA’s Guide to Financing Retirement Healthcare, discussing Medicare and related planning for retirement health care. It is available as a member benefit in the Resource section and in Forefield Advisor on the AICPA’s PFP website at aicpa.org/pfp (nonmembers can purchase it on CPA2biz.com). All AICPA members are eligible to join the PFP Section. CPAs who want to demonstrate their expertise in this subject matter can apply to become a PFS credential holder.

James Sullivan, CPA/PFS, is a financial planner in Wheaton, Ill. He specializes in working with clients, and the families of clients, suffering from chronic illness.