Challenges when working with the IRS has emerged as the top issue for firms with 10 or fewer professionals, according to the 2022 AICPA Private Companies Practice Section (PCPS) CPA Firm Top Issues Survey, which was released Tuesday at the AICPA & CIMA ENGAGE 2022 conference.

The IRS issue didn't resonate only with the smaller firms. It also ranked as the No. 2 concern for firms that employ 11–20 professionals and third among those that employ 21 or more professionals — which generally have more resources to deal with such challenges.

"It's not a surprise IRS issues are a top challenge for firms — the AICPA has advocated for a number of urgent changes to help the agency perform better," said Lisa Simpson, CPA, CGMA, vice president–Firm Services for the Association of International Certified Professional Accountants, representing AICPA & CIMA.

IRS service issues have been the subject of congressional hearings and reports by the Treasury Inspector General for Tax Administration. Examples of the service issues include the IRS's inability to meet timeliness standards for most taxpayers' cases, sending erroneous automated messages, failing to answer most phone calls, and failing to process a large backlog of tax returns.

The PCPS survey data illustrates the struggles faced by practitioners. Last year was the first time that working with the IRS was a choice for respondents. 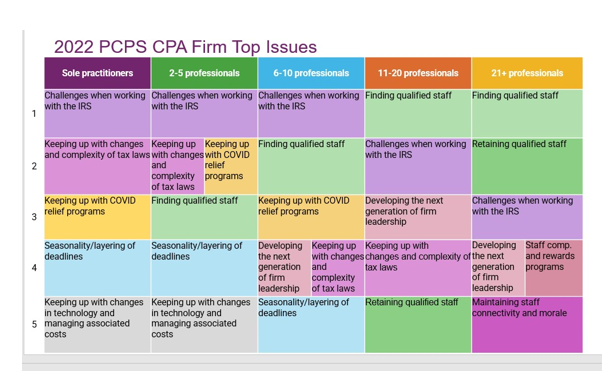 The survey, conducted from April 19 to May 23, was completed by 752 firms. The firms were given a list of issues and asked to rank each on a scale of one to five, with one indicating that an issue was of little-to-no concern and five indicating that it was of utmost importance.

The survey, which began in 1997, was conducted in consecutive years for the first time. It will return to its every-other-year schedule in 2024.

The top issue in last year's survey was finding qualified staff, which remained the top concern for the two largest cohorts (11–20 and 21 or more professionals).

Aside from IRS challenges, the two issues that ranked in the top 10 for all size categories were keeping up with COVID relief programs and seasonality/layering of deadlines.

"Looking at the collective survey list, we know firms are being asked to do more than ever before," Simpson said. "Firm leaders have a difficult balancing act right now in serving their clients well and making sure demands on staff aren't too burdensome."

Developing the next generation of firm leadership ranks among the top 10 in all size categories except sole practitioners. This is the second straight survey in which firms have shown they understand the need to prepare for succession to new leadership.

As in the previous two surveys, respondents were asked which issues they expect to affect them most over the next five years.

A few issues ranked in the top five across most or all groups.

Emerging technologies (data analytics, artificial intelligence, blockchain, etc.) was cited as a top-five variable that will have the most impact on their firm over the next five years among all cohorts, and managing a hybrid workforce is an issue among all groups, except sole practitioners. 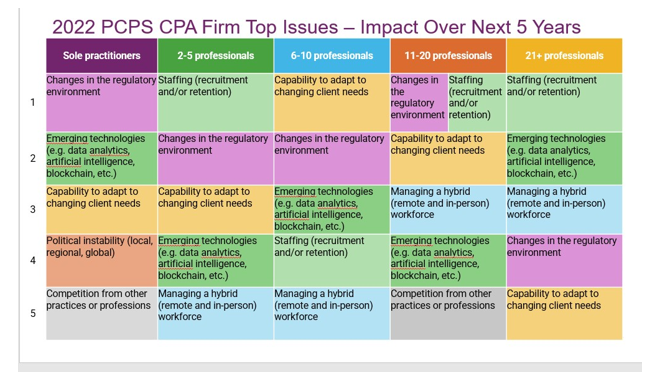 The survey results were unveiled Tuesday afternoon in a special live episode of the AICPA Town Hall Series held at the ENGAGE conference in Las Vegas.

Impact over the next five years

— To comment on this article or to suggest an idea for another article, contact Kevin Brewer at Kevin.Brewer@aicpa-cima.com.