Potential trade conflicts between the United States and its major economic partners give 38% of finance decision-makers reason for moderate or significant concern, according to a survey of U.S. leaders in business and industry.

Responses from the middle of May, before the administration of President Donald J. Trump announced plans to place tariffs on goods imported from countries such as China, show that 40% of CPA decision-makers said their business would be affected by a trade conflict. Of that group, 22% called the impact significant, and 57% predicted a moderate impact.

Overall, 35% said their businesses would suffer no impact as a result of trade conflict, and 21% said they weren’t sure. The top reasons for concern were a general economic slowdown (35%), followed by rising costs (20%) and rising prices on goods or services sold (19%).

The White House announced on May 29 plans to place a 25% tariff on $50 billion worth of goods from China that contain “industrially significant technology.” A list of goods is expected to be announced by June 15, “and tariffs will be imposed on those imports shortly thereafter,” the White House statement read.

Two days later, the United States announced it would implement a 25% tariff on steel imports and a 10% tariff on aluminum imports from Canada, Mexico, and the EU.

That same day, May 31, the leaders of Canada and Mexico announced immediate plans for countermeasures, which the nations said would be in place as long as the U.S. measures were. Canada’s response said it would impose “surtaxes or similar trade-restrictive countermeasures” against imports of steel, aluminum, and other products from the United States, up to a value of CAD 16.6 billion ($12.83 billion).

The EU and Canada later responded by claiming, in complaints to the World Trade Organization (WTO), that the tariffs were inconsistent with WTO tariff agreements. “These measures appear to be inconsistent with the United States’ obligations under the covered agreements,” which include the General Agreement on Tariffs and Trade from 1994, according to the EU’s request for dispute consultation.

Of 542 responses, 37% were neutral about a potential trade conflict, and 17% were not concerned (see chart below).

Information related to trade questions was released by the Association of International Certified Professional Accountants on Monday, 11 days after more general information was released in the quarterly Business and Industry Economic Outlook Survey.

In that survey, overall sentiment dropped slightly from the first quarter, but sentiment is near record highs and remains more positive than at this time a year ago. Projections for hiring are on the rise, especially for smaller businesses.

Another survey underscores the potential strain of tariffs on the U.S. economy. The quarterly Business Roundtable CEO Economic Outlook Survey shows that 91% of CEOs see trade-related increases in costs of imported goods as a moderate or serious risk.

That survey had record-high overall sentiment in the first quarter of 2018. While the outlook remains positive, uncertainty regarding U.S. trade policy led to the survey’s first decline in economic sentiment in nearly two years.

Question: How concerned are you about potential trade conflicts between the United States and major trade partners such as China or the European Union? Answers are on a scale of 1 to 5, where 1 is not concerned, 3 is neutral, and 5 is significantly concerned. 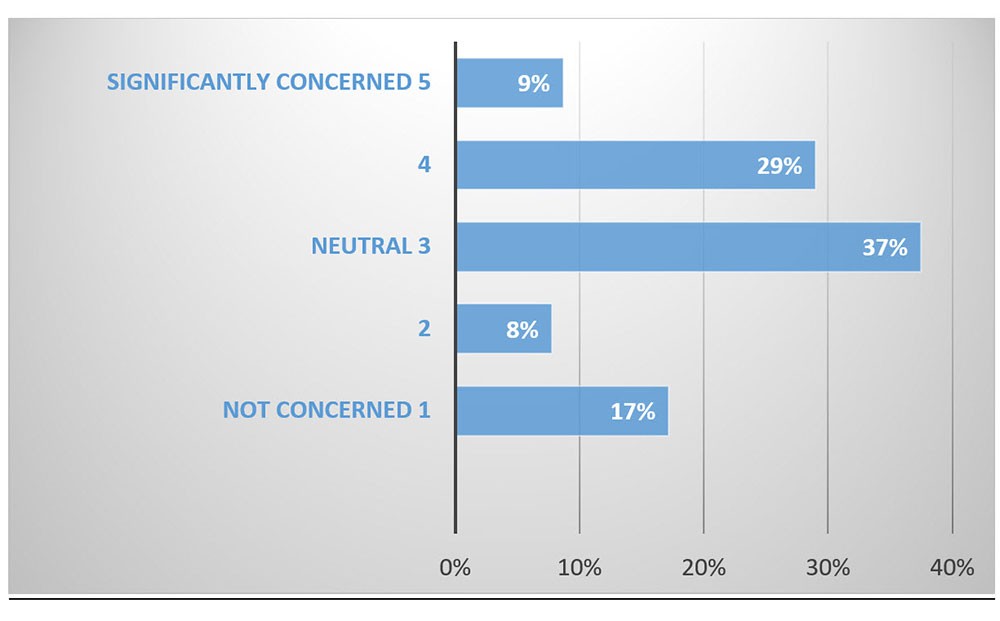