A steadier outlook for the economy

Optimism about the U.S. economy, which soured in the first quarter, rebounded in the most recent survey of CPA executives in business and industry.

Projections for revenue, profit, and expansion plans, down slightly year over year, are higher compared with the previous quarterly survey. The latest figures were released Thursday by the AICPA.

CPA decision-makers are less optimistic about the global economy than the domestic economy for the next 12 months: 18% are optimistic, and 32% are pessimistic. The rest, about half of respondents, are neutral—in line with sentiment of a year ago, but much more positive when compared with the previous quarter. Earlier in 2016, 52% were pessimistic about the global economy.

U.S. finance executives are more optimistic about their own companies than about the domestic economy, though that sentiment about their business is lower than a year ago.

Eight of the nine equally weighted indicators in the CPA Outlook Index (CPAOI) rose on a quarterly basis; only training and development remained steady. All nine are down compared with spring 2015. The composite CPAOI, at 68, rose for the first time after five consecutive quarterly declines. An index reading above 50 indicates a generally positive outlook. 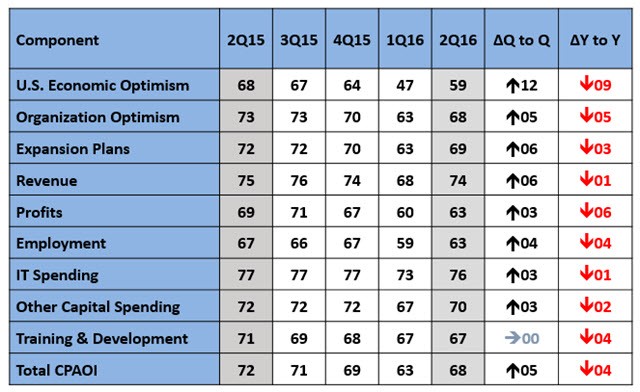 Regulatory requirements and changes, often the top challenge listed in the survey, returned to the top spot this quarter after falling behind domestic economic conditions in the first quarter. Availability of skilled personnel was behind regulation and the domestic economy on the list of challenges. Employee costs and benefits, second on the challenges list in the second and third quarter of 2015, is fifth on this quarter’s list.

Thirty-seven percent of companies say they don’t have enough employees, up from 35% a year ago and 31% a quarter ago. Of companies with too few employees, a larger percentage were planning to hire a year ago compared with this quarter. Almost half (49%) say they have approximately the right number of workers, down from 55% in the second quarter of 2015.

Finance executives picked the following as top challenges facing their organizations in the second quarter: