U.S. finance executives continue to have a less optimistic view of their own businesses and the domestic economy.

The CPA Outlook Index, a nine-component measurement of sentiment, shows that CPA decision-makers in the United States are less confident than they were a year ago, especially in the domestic economy. Expectations for profits, revenue, and expansion also dropped. Declines are muted in some index components, but all are down from the fourth quarter of 2014, when overall sentiment rose for the fourth quarter in a row. 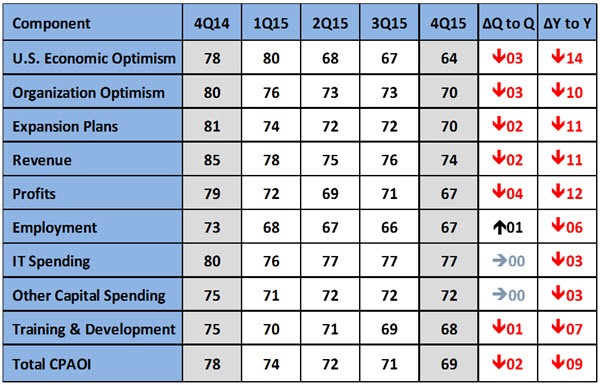 Index measures for U.S. economic optimism, organization optimism, expansion plans, revenue, and profits all dropped by at least 10 points in the past year. The employment component, a reflection of hiring plans, rose one point from the last quarter to 67 compared with 73 a year ago.

Forty-five per cent of respondents—mainly CFOs and controllers—are optimistic about the U.S. economy, a drop from 64% who were optimistic a year ago. The optimists most often cited construction, employment, and lower oil prices as reasons for a positive outlook. The primary reasons given by those expressing less optimism about the U.S. economy were regulation, leadership, and political gridlock as well as global economic turmoil.

John Robinson, CPA, the treasurer for U.S. operations for IKEA, a global seller of furniture and other household accessories, said U.S. consumers have more confidence but remain selective when it comes to spending. Recovery from the 2008–2009 financial crisis has been uneven, which is why he characterizes his sentiment as “optimistic with some degree of restraint.”

“You don’t have an economy that’s firing on all cylinders,” Robinson said. “Good but not great seems to be the new norm.”

Regulatory requirements and changes again ranked as the top challenge in the survey, which used the responses of 852 CPA decision-makers. Domestic economic conditions, fifth on the list of concerns a year ago, moved up to second, ahead of domestic competition and availability of skilled personnel. Employee benefits and costs, which had been the second most-cited challenge in the second and third quarters of this year, dropped to sixth.

Organization optimism in the survey has fallen in nine of 10 industries since the fourth quarter of 2014; only technology optimism is higher than at this time a year ago. Retail optimism fell from 66% to 28% in the past year; manufacturing optimism declined from 71% to 41%.

Businesses of all sizes have scaled back expansion plans in the past year. For example, 65% of businesses with revenue of less than $10 million in the fourth quarter of 2014 planned to expand. This quarter, that number dropped to 52%. Medium-size and large businesses also reported being less likely to expand in the next year.