Not since 2007 have U.S. accountants in industry felt as optimistic about the future of their companies and the state of the domestic economy as they do now.

While concerns about regulatory requirements linger, and some companies remain hesitant to deploy cash or hire, those potential obstacles can’t stem the rising tide of optimism regarding U.S. businesses’ next 12 months. That’s what the numbers show in the third-quarter Business & Industry Economic Outlook Survey, released Thursday by the AICPA.

Since the third quarter of 2012, optimism about the U.S. economy has gone from 22% to 52%. Optimism about finance professionals’ own companies has risen from 44% to 65% in that span.

Those components make up the CPA Outlook Index, which hit 74, the highest mark since the first quarter of 2007. An index rating above 50 indicates a positive outlook.

All nine components in the index have increased by at least four points in the past year, led by an eight-point rise in planned spending for training and development.

One measure of optimism in the United States is increased shipping imports, said Valerie Rainey, CPA, CGMA, the CFO at INTTRA, a global e-commerce provider for the shipping industry. The company publishes a monthly ocean-freight index jointly with Cass Information Systems, and the most recent one, from July, shows year-over-year growth of 5.8% for U.S. imports and month-over-month growth of 15.4%. The index measure for imports is the highest since the survey began in January 2010.

“When that happens, what are [companies] doing? They’re replenishing their inventory,” said Rainey, vice chair of the AICPA Business & Industry Executive Committee.

Respondents were asked their top challenges. The top challenges cited, in order, were regulatory requirements and changes, domestic economic conditions, availability of skilled personnel, and employee and benefits costs. Organizations project health care costs to rise 6.6% in the coming year.

David Citarelli, CPA, feels the sting of increased costs. Citarelli, the CFO of McDevitt Trucks, a seller of heavy-duty trucks with five dealerships in Massachusetts, New Hampshire, and Vermont, said an early projection for health care costs in the coming year showed a 17% increase. And factory-mandated training, part of the company’s franchise agreements, eats up much of McDevitt’s training budget.

Citarelli is mildly optimistic about his company’s prospects, even though he doesn’t project sales of new heavy-duty trucks to rise. Consumers continue to hold on to vehicles longer than they did in the past. “The service-and-parts business will continue to be reasonably stable,” said Citarelli, who added that his company doesn’t expect to add staff in the coming year. 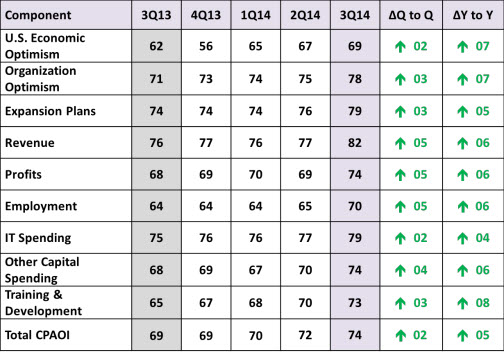