Finance professionals are upbeat, but they have staffing concerns

U.S. finance professionals are feeling good on a number of fronts. They are optimistic about the U.S. economy and their own businesses. Most expect to make a higher profit than they did a year ago, and an increasing number say they’d like to hire additional staff.

That last part is, however, becoming more of a challenge. Organizations, possibly as a result of struggling to find the right workers, are devoting more money to training existing staff, according to the most recent quarterly AICPA Business & Industry Economic Outlook Survey.

The CPA Outlook Index (CPAOI), a measure of nine equally weighted factors, rose to 72—the highest in more than six years. The index (see table below) continued a steady climb from previous second quarters; it was 69 in the second quarter of 2013.

Availability of skilled personnel ranked third on a list of challenges, up from sixth a year earlier. The top challenge, for a fifth consecutive quarter, was regulatory requirements and changes, and second place went to employee and benefits costs, which has held the No. 2 spot for three straight quarters.

That shuffle in the challenges list could be one reason training costs are projected to rise. In the second quarter of 2010, for instance, when the overall CPAOI was at 61, training did not register as a big priority; companies were projecting an increase of just 0.1% for training in the coming 12 months.

That number rose to 1.8% in the most recent survey, up from 1.3% a year ago. The training projection increased or remained steady in 16 of the past 21 quarters.

Companies also want to hire more than in the past. The number of companies with too few employees that plan to hire increased from 12% a year ago to 17% in the most recent quarter.

Despite the talent challenges, companies in general feel good about growth prospects in the coming year. One of those companies is Illinois-based Shorr Packaging, where targeted growth is 12% a year, according to COO Craig Funkhouser, CPA.

Shorr distributes protective packaging such as plastic air pillows for e-commerce companies as well as general mailing and food service. Funkhouser said the company is looking to expand to new markets such as Atlanta and Southern California, adding sales and warehouse employees.

The company’s biggest challenge is margin pressure. “As we expand into new markets, people don’t know who we are, and sometimes our sales people end up selling based on price instead of on value,” Funkhouser said. “That’s what we deal with to get market share, so our margins do get squeezed a bit.”

It’s not the only company forecasting growth. Respondents predict revenue to rise 3.8%, the highest rate in five years. Profit is projected to grow 2.9%, up from 2.4% from the second quarter last year. In the index, profit optimism was up two points from the same quarter last year, but down a point from the first quarter—the first dip in five quarters.

Finance professionals expect their businesses to increase staffing 1.3%, up from 1% a year ago. Expected salary and benefits increases have remained relatively steady since 2011, falling between 1.9% and 2.3%. This quarter, the expected rise is 2.1%. 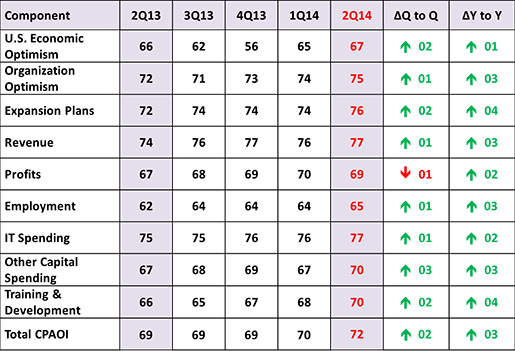