A FASB advisory committee asked stakeholders what they thought the board’s standard-setting priorities should be. Respondents said they wanted simplicity and better information.

The top three reasons improvements are needed to financial reporting standards, according to 105 respondents participating in a Financial Accounting Standards Advisory Council (FASAC) survey, are:


The disclosure framework project, whose aim is to streamline disclosures in the footnotes to financial statements and make them more effective, was ranked as the most important project on FASB’s agenda for the next three to five years.

The survey asked respondents to rank the importance of various early-stage projects. The project listing excluded active agenda projects that FASB expects to complete by the third quarter of 2013 or expected to issue an exposure draft in by the second quarter of 2013.

In addition to the disclosure framework, projects that respondents rated most worthy of being on FASB’s agenda for the next three to five years, in decreasing order of importance, were:


(For a full ranking of the 27 projects included in the survey, see the chart at the end of this article).

Respondents said it’s important to complete some of the significant projects already on FASB’s agenda, in addition to addressing the needs of private companies and not-for-profits. In situations where improving U.S. GAAP does not align well with international standards convergence, 83% of the 77 respondents answering the question said improvement to U.S. GAAP should be given more weight.

About half of respondents support the reorganization or enhancement of FASB’s Accounting Standards Codification (ASC). FASB chairman Russell Golden said last week that the board has begun rewriting some of the more confusing sections of the ASC, with a rewrite of the liabilities and equity section underway.

Golden said in a news release that the FASAC survey provides important feedback on where FASB should focus its efforts.

“The results … are a valuable source of information about what our project priorities should be and will help guide our decisions about where to deploy resources,” Golden said.

In the FASAC survey, respondents were given 100 points to “spend” on projects they believed should be on FASB’s agenda for the next three to five years. They were asked to allocate their points to reflect how deficient U.S. GAAP is and how urgent it is that FASB address the topic. Eighty-three respondents completed the exercise. Here are the results: 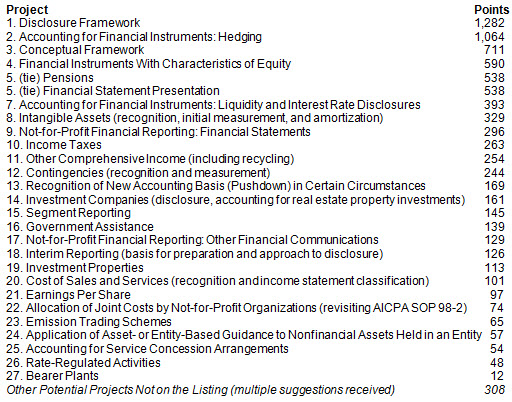 Source: Responses to the FASAC Survey.