Google’s Android and Apple’s iOS strengthened their positions in the global smartphone operating system market in the fourth quarter of 2012 as the number of shipments grew 42% year over year, International Data Corporation (IDC) reported Thursday with the release of its Worldwide Quarterly Mobile Phone Tracker.

Android smartphone vendors and Apple accounted for 91.1% of the 227.8 million smartphone shipments during the three months ended Dec. 31, up from a combined market share of 85.9% in the fourth quarter of 2011.

“The dominance of Android and Apple reached a new watermark in the fourth quarter,” Ramon Llamas, research manager with IDC’s Mobile Phone team, said in a press release. “Android boasted a broad selection of smartphones, and an equally deep list of smartphone vendor partners. Finding an Android smartphone for nearly any budget, taste, size, and price was all but guaranteed during 2012. As a result, Android was rewarded with market-beating growth.

“Likewise, demand for Apple’s iPhone 5 kept iOS out in front and in the hands of many smartphone users. At the same time, lower prices on the iPhone 4 and the iPhone 4S brought iOS within reach of more users and sustained volume success of older models.”

Shipments of phones running on Windows Phone/Window Mobile operating systems more than doubled in the fourth quarter, thanks in large part to Microsoft’s introduction of the Windows Phone 8 during the quarter. Even with that growth, however, the Windows platforms accounted for only 2.6% of the smartphone OS market.

The competition in the smartphone space is poised to heat up in 2013 with Microsoft continuing to push Windows 8, and BlackBerry trying to return to relevance with BlackBerry 10, which hit the market in January.

“With the recent introductions of two new smartphone platforms, we expect some ground to be made by the new entrants over the coming years,” Ryan Reith, program manager with IDC’s Mobile Device Trackers, said the press release. “There is no question the road ahead is uphill for both Microsoft and BlackBerry, but history shows us consumers are open to change. Platform diversity is something not only the consumers have asked for, but also the operators.” 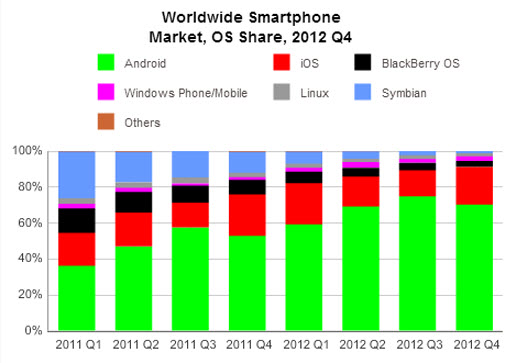