BY KIM NILSEN AND KEN TYSIAC 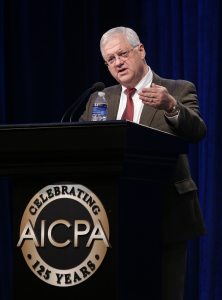 The chairman of the new Private Company Council envisions trying to change FASB standards for all users before attempting to create exceptions or modifications to standards for private companies.

The chairman, Billy Atkinson, said during an AICPA fall Council presentation Monday that he would favor differential standards for private companies only after exploring with FASB the idea of modifications for all companies—private and public.

The Private Company Council (PCC), created by FASB’s parent organization, the Financial Accounting Foundation (FAF), will meet for the first time on Dec. 6. Atkinson said Monday that the council’s approach and processes have not yet been discussed. He was named chairman of the PCC despite his past opposition to differential standards beyond disclosure nuances.

Randy Myeroff, an Ohio CPA whose firm audits about 250 private companies, asked if Atkinson would keep an open mind when it comes to measurement and recognition differences for private companies. Atkinson said he would. But in his speech and an interview afterward, his focus dealt with broader fixes before exceptions and modifications.

“If we do have fixes, we should first evaluate the fixes from the standpoint of all the users, not just the private company users,” Atkinson said in an interview Monday following the council session.

Such a broad process would likely be slower than a system in which the PCC simply recommended exceptions or modifications to U.S. GAAP for private companies. During Monday’s session, AICPA President and CEO Barry Melancon said Atkinson was describing a “fairly lengthy process.”

As described by the FAF, the PCC was established with a twofold mission:

“At the get-go it’s very important that we begin to see some action—some real substantive confirmation of our purpose,” Atkinson said in an interview after his speech.

But he said many public companies have the same angst as private companies with regard to certain financial reporting and measurement. So he said it makes sense to include them in the “decision tree” in this process.

“My viewpoint is that you can’t rush it,” Atkinson said. “It took a while to get here. We’ve got to take a while to assess the process of promulgating standards going forward, which I believe FASB has already done. But in the look-back we’ve got to be very careful and see if there’s an opportunity to fix things more broadly.”

He also said the idea of a holistic approach “is really emanating from me and that’s not a decision we’ve made yet” as a council.

GAAP exceptions approved by the PCC are subject to endorsement by a simple majority of FASB members. If FASB fails to endorse a PCC decision, it must provide public, written notice of the reasons. FASB is developing a framework for making decisions about whether and when U.S. GAAP should be modified for private companies.

Atkinson opposed the Blue-Ribbon Panel on Standard Setting for Private Companies supermajority that called for the creation of a board independent of FASB that would make exceptions and modifications to U.S. GAAP for private companies. He served as chairman of the National Association of State Boards of Accountancy from 2009 to 2010, and retired from practice after working for 39 years as an audit and risk management partner in PwC’s private company services unit.

During Monday’s session, Melancon asked Atkinson to comment on the message FAF was sending by naming a Big Four accounting firm veteran to lead the PCC. Atkinson said he gained experience with growing private companies in the Houston office of his firm, which consisted of 25 people when he started there in 1974. He said he also is on the board of directors of Atkinson Candy Company, which is private.

“One has to look back at my career and my experience and the market in which I practiced the dominant part of my career to see that my reference to private companies and all the attributes of financial reporting and all the dynamics of running a private company are in my resume,” Atkinson said.

Atkinson said speaking in front of the AICPA Council provided him with an “acid test” for the task the PCC has ahead. Reaction to his agenda was skeptical.

“This Council overwhelmingly endorsed this concept of differentiation. I was enlightened to hear you say that you want input,” said Robert R. Harris, a former AICPA chairman. “This Council has given it three times as leaders of the profession. Ten thousand of our members contacted FAF. You say you want input. We give input. And honestly I would tell you I would bet that all 10,000 members feel that we were not listened to by FAF.”

“These people are passionate,” Atkinson said in an interview. “They have a concern. They have an angst that’s very well justified. And so I appreciate their anxiety about this topic.  And the reality is that the process has resulted in this type of an organizational approach within FAF and FASB and I respect that approach as we go forward. I’m not going to be a rebel or a deviant to that approach.”