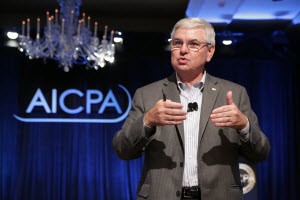 The U.S. must keep pushing for convergence of U.S. GAAP and international standards, AICPA President and CEO Barry Melancon urged in a speech Monday.

Melancon, addressing the AICPA governing Council, raised concerns that support is waning for convergence of international standards and U.S. GAAP, with talk of comparability rather than convergence bubbling from the U.S.

FASB and the International Accounting Standards Board (IASB) are responding to different stakeholders and are having some difficulties agreeing on a harmonized approach to certain projects, he said.

One example: FASB in July decided to take a step back from the so-called “three-bucket” impairment model the boards had been developing for financial instruments. FASB is separately developing a “Current Expected Credit Loss” (CECL) model.

With convergence in question, SEC action on IFRS adoption is also uncertain. The SEC made the convergence progress by FASB and the IASB one of the milestones upon which the commission will base its IFRS decision.

The U.S. could face consequences for not pushing steadily forward on convergence and adopting IFRS, Melancon warned. Ramifications could include waning influence among accounting standard bodies. Also in question is whether the U.S. would have a seat at the table in a new forum of international accounting bodies the IASB is expected to create.

—Kim Nilsen ( knilsen@aicpa.org ) is executive editor for the JofA.