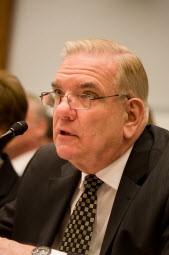 Robert Attmore, who has been chairman of GASB since July 2004, will retire from the post in June.

Attmore, a former auditor and deputy comptroller for the state of New York, also has served as president of the National State Auditors Association. His retirement was announced Tuesday by the Financial Accounting Foundation (FAF), GASB’s parent body.

“During Bob’s tenure, the GASB has tackled such important—and difficult—accounting issues as pensions and other retirement benefits, derivatives, municipal bankruptcies and fund balance reporting with professionalism and a regard for the concerns of every affected party,” FAF Board of Trustees Chairman John J. Brennan said in a statement.

Attmore said in a statement that he is retiring to devote more time to his family in the Albany, N.Y., area. He said the next nine months will provide adequate time to ensure a smooth transition to new leadership.