Concerns over technology breaches and data security are soaring among the largest U.S. tech companies, according to a new report from accounting and consulting firm BDO.

An examination of the most recent SEC 10-K filings for the 100 biggest publicly traded technology companies found that 71% listed data-security breaches as a major risk to their operations, according to the 2012 BDO Technology RiskFactor Report.

That’s a jump from 57% in 2011 and 44% in 2010, making cybersecurity failure the fastest rising risk found in the 10-Ks, which are detailed business-performance reports that U.S. public companies must file each year.

Hacking incidents have rocked technology companies, credit card giants, and government agencies over the past couple of years. One of the biggest attacks took place at Sony Corp., which announced in April 2011 that a server security breach had compromised the personal data of more than 70 million online video game subscribers, most of them on the company’s PlayStation Network. Sony had to shut down the PlayStation Network for a month and deal with criticism that the company was too slow in revealing the breach. The company suffered a second attack in October that affected 93,000 accounts.

“Data breaches can be very costly to the business and have a significant negative impact on a company’s reputation and brand,” Clark Schweers, managing director at BDO Consulting and head of the firm’s Insurance Claim Services practice, said in the report. “Leading companies are looking for ways to manage the risk.”

Data breaches were far from the only risk cited by U.S. tech companies, according to the BDO report. In fact, they ranked just 17th overall on the list of top concerns. In the wake of last year’s devastating earthquake and tsunami in Japan, the percentage of companies listing natural disasters, war, conflicts, and terrorist attacks as major risk factors jumped to 88% from 81%. Concerns about supply chain interruptions also were cited as risk factors in 88% of the 10-K reports studied. That was up from 86%.

The top three concerns were unchanged from 2011. Here is the full list. 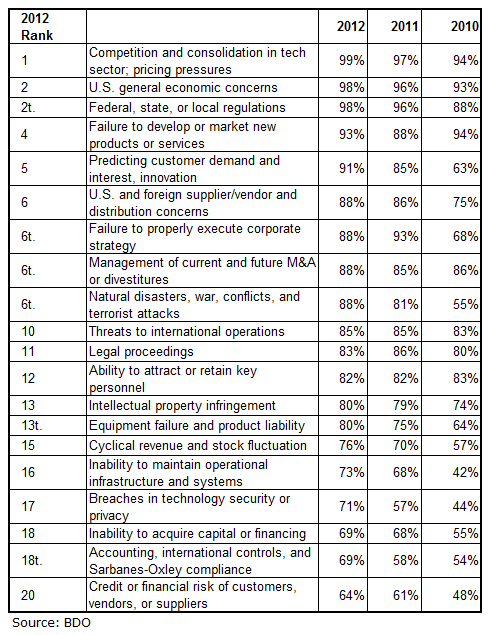