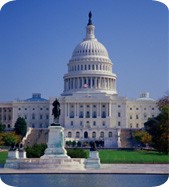 This page tracks developments in five hot tax topics affecting taxpayers in 2010 and 2011 that Congress has had under consideration.

On Dec. 17, President Barack Obama signed into law the Tax Relief, Unemployment Insurance Reauthorization, and Job Creation Act of 2010 (HR 4853), which deals with four of the five hot topics, as discussed below. The bill was passed by the Senate on Dec. 15 and by the House of Representatives on Dec. 16.

For details of the bill, read “Provisions in the Senate’s Tax Cut Extension Bill.”

Currently, payments to corporations are excepted from the Form 1099 information-reporting requirements, but starting for payments after December 31, 2011, businesses will be required to file an information return for all payments aggregating $600 or more in a calendar year to a single payee, including corporations (other than a payee that is a tax-exempt corporation). This change was made by the Patient Protection and Affordable Care Act, enacted in March 2010. In addition, owners of property who receive rental income will be required to issue Forms 1099 to service providers for payments of $600 or more during the year, effective for payments made after December 31, 2010. Two votes to repeal the expanded 1099 requirement failed to pass the Senate on November 29.

The estate and generation-skipping transfer taxes are repealed for 2010, but were scheduled to return in 2011 in the form they were before passage of the Economic Growth and Tax Relief Reconciliation Act. This would have meant that in 2011 the exemption would be reduced to $1 million (adjusted for inflation), the tax rate would be 55%, and the state death tax credit would be revived.

HR 4853 reinstates the estate tax for two years at a 35% rate with a $5 million exemption amount. It also reinstates the generation-skipping transfer tax and restored the unified credit against gift tax for gifts made after 2010.

The Economic Growth and Tax Relief Reconciliation Act introduced a new 10% tax bracket for individuals and reduced the other tax brackets to 25%, 28%, 33%, and 35%. Those changes were scheduled to sunset after 2010, but HR 4853 continues them for two years. The 15% tax rate for capital gains (0% for taxpayers in the 10% and 15% tax brackets), which was scheduled to expire after 2010, is also continued for two years.

EGTRRA’s repeal of the itemized deduction phaseout and the personal exemption phaseout are also extended by the act for two years.

For businesses, the act makes the following extensions, among others:

Many other expired tax credits and deductions are also extended through 2011 by the bill.


More from the JofA: