Businesses that export goods or services are evaluating how to best use IC-DISC and/or FDII incentives if tax rules change.

If U.S. tax rates increase, how would this affect the U.S. export tax incentives known as the foreign-derived intangible income (FDII) deduction and the interest charge domestic international sales corporation (IC-DISC) regime? What steps should U.S. exporters consider taking to maximize the benefit of these tax breaks in a higher-tax environment? These questions are the focus of this article.

At the time of this writing, it is unknown what tax changes might be enacted. On various occasions, President Joe Biden's administration has proposed raising the federal corporate income tax rate to 28% from 21%, as well as doubling the effective federal corporate income tax rate on global intangible low-taxed income (GILTI) from 10.5% to 21%. Proposed changes affecting business owners notably include an increase in the federal tax rate on capital gains to 37% for taxpayers with adjusted gross income of over $1 million, a phaseout of the 20% qualified business income (QBI) deduction for taxpayers earning more than $400,000 a year, and the elimination of the cap on the wage base for Social Security taxes, which are currently paid on only the first $142,800 in wages for 2021.

If the federal corporate income tax rate increases, the formula used in computing the FDII deduction means that a taxpayer's FDII would have a higher effective tax rate.

While the Biden administration has proposed eliminating the FDII deduction, which was introduced as part of the law known as the Tax Cuts and Jobs Act (TCJA), P.L. 115-97, it is unknown as of the time of this writing how this proposal will fare. The administration has stated that it believes the FDII deduction is ineffective at incentivizing corporations to invest in research and development (R&D) and encourages them to shift assets abroad.

There is currently no Biden administration proposal to modify the IC-DISC regime. But this export tax incentive would become less valuable if taxes were increased on qualified dividend income, as the administration has proposed.

In short, these two export tax incentives could be affected by changes ahead. Taxpayers that are considering taking advantage of the preferential rates under the FDII or IC-DISC regimes, or that already do, are likely questioning what the impact of the proposed tax increases would be on their operating and supply chain structures and how — taking into account the myriad proposed tax changes — to best prepare for such an environment.

The FDII deduction's purpose is to provide U.S. corporations an incentive to export goods and services to other countries while locating their intangible assets (such as patents, trademarks, and copyrights) in the United States. The deduction is available only to C corporations.

This export tax incentive, effective for tax years beginning after Dec. 31, 2017, allows a reduced effective federal corporate income tax rate to be applied to excess returns on certain foreign-derived income. Specifically, under Sec. 250(a)(1)(A), a domestic C corporation can claim a deduction equal to 37.5% of its FDII (this will decrease to 21.875% for tax years beginning after Dec. 31, 2025).

Prior to the TCJA, the United States' predominant export tax incentive was the IC-DISC regime. In its simplest form, an IC-DISC is an entity set up by an exporter that acts as a sales commission agent. An IC-DISC is commonly owned either by an exporter itself (if it is a flowthrough entity, such as an S corporation or a partnership) or by the shareholders of the exporter via a brother-sister structure (if the exporter is a C corporation). The primary reason exporters use IC-DISCs is to convert a portion of ordinary income into qualified dividend income, thus reducing the effective tax rate on some export income.

Another beneficial feature of an IC-DISC is that it may defer the distribution of net income from up to $10 million of its qualified export receipts. (Any undistributed amounts in excess of this $10 million receipts threshold are subject to an interest charge, and in practice most taxpayers generally seek to defer distribution by no more than one year.)

In contrast to these made-in-the-USA requirements, the FDII regime does not contain specific rules governing where the goods are manufactured or where their content is derived, but instead predominantly looks to the location of the purchaser and (other than in the case of services) the location in which the product is used.

In recent years, the benefit of operating through an IC-DISC has diminished somewhat because it has become less advantageous to convert ordinary income to qualified dividend income, due to the fact that the TCJA reduced the corporate income tax rate to 21% and introduced the QBI deduction.

However, could the prospect of an increased corporate income tax rate, combined with a phaseout of the QBI deduction, bring an IC-DISC structure back into consideration? And for C corporations currently taking advantage of the FDII regime, will the prospect of a diminished FDII benefit, combined with the potential removal of qualified dividend income rates upon repatriation, necessitate entity type changes? 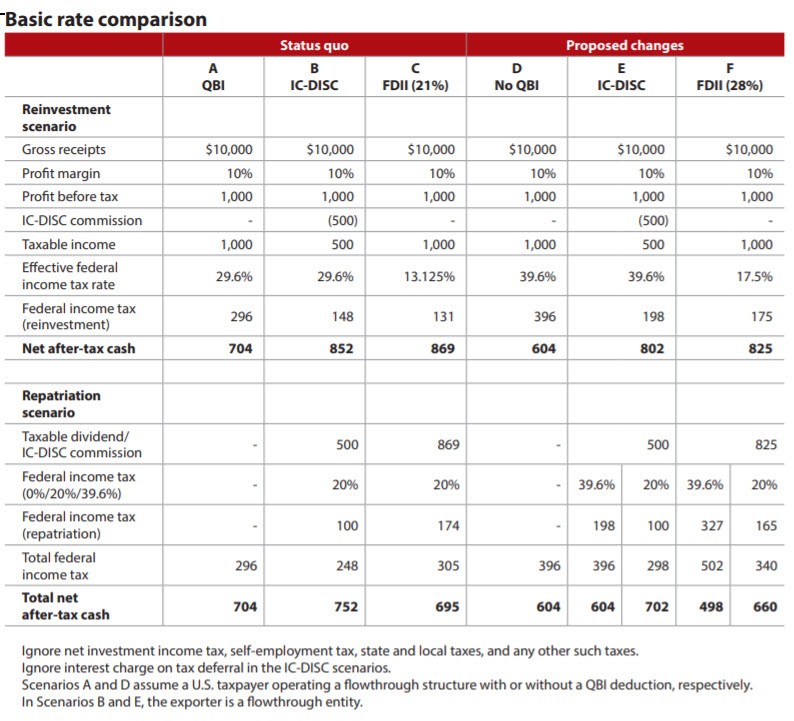 In the status quo scenario, the comparison is relatively clear. For a U.S. exporter operating in a flowthrough structure, the IC-DISC may be a more efficient option in that it results in the lowest overall effective federal income tax rate (in addition to allowing an opportunity to defer U.S. income tax on the commission). FDII, too, allows for a number of efficiencies in a status quo scenario. Particularly notable is the fact that the overall federal income tax in a reinvestment scenario may be the lowest, and — compared with an IC-DISC — there is more flexibility to defer U.S. taxation on profits that are reinvested into the business.

But what about the impact of the proposed changes in tax rates? Given the many variables, the comparison in the rising tax scenario is less clear. It is obvious, however, that a repeal of qualified dividend income rates would limit the benefit of an IC-DISC to a mere tax deferral in a structure where the exporter is a flowthrough entity. If federal corporate income tax rates increase, the FDII structure may result in the highest overall tax, in particular due to the double layers of taxation involved when repatriating earnings to the shareholders of a domestic C corporation (the only entity type eligible to claim an FDII deduction).

Does this mean that operating in a flowthrough structure is the best option going forward, all other things being equal? The answer is "not quite." For those exporters that would still be eligible for qualified dividend income rates (i.e., taxpayers with adjusted gross income below the proposed $1 million threshold), using an IC-DISC may continue to be a viable and efficient strategy. For smaller exporters eligible for qualified dividend income rates, FDII, too, may continue to remain a viable option.

Other U.S. taxpayers, however, that have structured themselves into a C corporation to claim the FDII deduction may be looking to restructure into a flowthrough entity (especially if the intent is to distribute the corporate earnings on a frequent basis). Alternatively, such C corporation exporters could consider establishing an IC-DISC. In a C corporation structure, if the intent is to distribute more frequently, establishing an IC-DISC may provide an advantage of a deductible dividend being achieved by way of a commission paid to a sister IC-DISC. Interestingly, it is worth noting that current guidance does not appear to preclude the taxpayer's ability to pay the IC-DISC commission and take an FDII deduction on the same transaction. The final FDII regulations (T.D. 9901) are silent regarding the interaction of the FDII regime with the IC-DISC regime.

The analysis here assumes that the IC-DISC and FDII regimes will continue to exist in their current form. If the FDII deduction is eliminated, as the Biden administration has proposed, a different set of issues will arise.

Assuming that both the IC-DISC and FDII incentives remain in place, another important aspect to highlight in connection with ownership structure decisions is how these tax incentive regimes affect non-U.S. investors. For taxpayers residing outside the United States in tax treaty jurisdictions, the export tax incentives may be greater. If dividends are subject to a relatively low tax rate in the non-U.S. investor's home jurisdiction, a non-U.S. investor could obtain a significant tax benefit by reducing the taxable income of the U.S. exporter entity, while receiving dividends subject to U.S. tax at a reduced rate (15%, 5%, or even 0%) under the applicable treaty.

It should be noted that Sec. 996(g) (applicable in the IC-DISC scenario but not the FDII structure) provides that in the case of a non-U.S. shareholder, all IC-DISC distributions are treated as U.S.-source income earned through a permanent establishment (and, thus, taxable to the non-U.S. investor in a manner similar to the U.S. investor). Nonetheless, certain specific tax treaty provisions (determined on a case-by-case basis) may override this IC-DISC permanent establishment rule, thereby significantly reducing the U.S. income tax on dividends in the hands of an eligible non-U.S. investor. Alternatively, FDII benefits could be explored for a non-U.S. investor not eligible for reduced treaty rates as a result of the application of Sec. 996(g).

Tax planning should be undertaken holistically. Other important factors to consider include the implications of restructuring and any entity type changes, the investor profile, whether deferral of taxation is preferred, the implications of exit, and state and local tax considerations, to name a few. Nonetheless, given the potential increase in effective tax rate differential, as well as uncertainty about the future of the FDII and IC-DISC incentives, taxpayers that have set up structures — or seek to — that take advantage of these export tax incentives should consider whether their facts and circumstances could result in a different ownership structure yielding savings.

To comment on this article or to suggest an idea for another article, contact Dave Strausfeld, a JofA senior editor, at David.Strausfeld@aicpa-cima.com.

Subscribe to the award-winning magazine The Tax Adviser. AICPA Tax Section members receive a subscription in addition to access to a tax resource library, member-only newsletter, and four free webcasts. The Tax Section is leading tax forward with the latest news, tools, webcasts, client support, and more. Learn more at future.aicpa.org/topic/tax. The current issue of The Tax Adviser and many other resources are available at thetaxadviser.com.

CPE SELF-STUDY: Covers tax terminology and regulations that apply to a U.S. entity involved in global operations or a foreign entity doing business in the U.S.

CPE SELF-STUDY: This self-study online certificate program is valuable to anyone who needs to understand the complexities of international taxation.

For more information or to make a purchase, go to future.aicpa.org/cpe-learning or call the Institute at 888-777-7077.