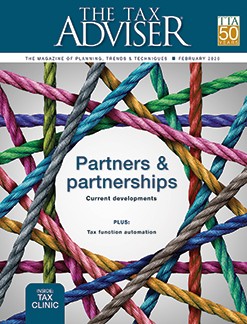 The TCJA also expanded bonus depreciation to certain used property, which is beneficial for taxpayers that acquire property that is not original-use. This change, among others, led to the need for new rules to address bonus depreciation post-TCJA.

One of the most significant changes in the final regulations is that the IRS reversed its position on property subject to a written binding contract that was constructed, manufactured, or produced for the taxpayer by another person so that it is now considered to be self-constructed, instead of being subject to the default written binding contract rules for determining the acquisition date. Because of this favorable change, third-party constructed property under a written binding contract is deemed to have been acquired on the date when physical work of a significant nature begins, including by application of the 10% safe-harbor test. This may favorably affect projects that started around the Sept. 27, 2017, date that were completed and placed in service in 2018 or later. For third-party constructed property without a written binding contract, the 2019 proposed regulations now provide that the property is deemed to have been acquired when more than 10% of the total cost of the property is paid or incurred.

The final regulations provide additional clarity around determining the date when a written contract becomes binding, for purposes of determining a property's acquisition date. Property acquired under a contract that was signed prior to Sept. 27, 2017, but became binding at a later point qualifies for 100% bonus depreciation.

To be qualified for bonus depreciation, a used asset must not have been previously used by the taxpayer or a predecessor at any time prior to the acquisition. The IRS provided in the final regulations that a predecessor includes:

A safe harbor was added that provides a five-calendar-year lookback period to determine if the asset was used by the taxpayer or a predecessor.

For a detailed discussion of the issues in this area, see "Tax Clinic: Bonus Depreciation Regs. Are Favorable for Taxpayers," in the February 2020 issue of The Tax Adviser.