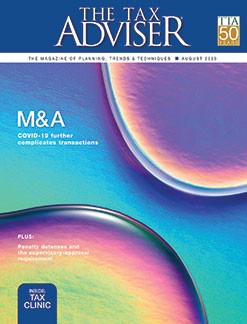 Perhaps no other statutory language has resulted in more interpretative headaches than the requirement under Sec. 6751(b)(1) that the IRS obtain written managerial approval of the "initial determination of ... [the penalty] assessment." Because the term is not found in any other part of the Code and, in fact, is anomalous when juxtaposed with other statutory provisions governing the assessment process, this is not surprising.

The Code defines an "assessment" as the formal recording by the IRS of the taxpayer's tax liability, which is "essentially a bookkeeping notation" (Sec. 6203; Laing, 423 U.S. 161, 170 (1976)). Generally, if the IRS asserts additional taxes are due, the Code requires it to "determine" the taxpayer's "deficiency" (Chai, 851 F.3d 190, 218 (2d Cir. 2017)). If the IRS determines a deficiency, it must then issue a notice of deficiency, which permits the taxpayer to file a petition with the Tax Court within 90 days. Once a petition is timely filed, the IRS is precluded from assessing the deficiency "until the decision of the Tax Court has become final" (Sec. 6213(a)). Accordingly, the statutory scheme contemplates that "one can determine a deficiency . . . and whether to make an assessment, but one cannot 'determine' an 'assessment'" (Chai, 851 F.3d at 218—19).

Because of this ambiguity, federal courts have placed more reliance on the legislative history surrounding Sec. 6751(b)(1). Specifically, that legislative history indicates Congress enacted Sec. 6751(b)(1) based on its belief that "penalties should only be imposed where appropriate and not as a bargaining chip" (S. Rep't No. 105-174, 105th Cong., 2d Sess., p. 65 (1998)). Moreover, Congress believed written managerial approval would "prevent IRS employees from arbitrarily using penalties as leverage against taxpayers" (144 Cong. Rec. 7627, 7873 (1998)). Thus, much of the federal courts' recent jurisprudence in interpreting the term "initial determination" has focused on furthering these legislative goals.

PENALTIES NOT SUBJECT TO MANAGERIAL APPROVAL

Sec. 6751(b)(1) does not apply to all penalties in the Code. Specifically, Sec. 6751(b)(2) statutorily exempts from the written managerial approval requirement penalties for the failure to timely file a return and timely pay tax under Sec. 6651 and failure of individuals or corporations to pay estimated taxes under Secs. 6654 and 6655, respectively. In addition, Sec. 6751(b)(1) does not apply to "any other penalty automatically calculated through electronic means."

In its own internal guidance, the IRS suggests that penalties are exempted from written managerial approval under Sec. 6751(b)(1) if "no Service human employee makes an independent judgment with respect to the applicability of the penalty" (Internal Revenue Manual (IRM) §20.1.1.2.3(5)). In addition, IRS guidance suggests that if a penalty is determined through electronic means and the determination is mailed to the taxpayer, the IRS is not required to comply with the written managerial approval requirement unless the taxpayer responds (IRM §4.19.25.5). However, the IRS takes the position that written managerial approval is not required when: (1) the taxpayer responds and fully agrees with the proposed penalty; (2) the taxpayer responds and only requests additional time but does not thereafter respond; (3) the taxpayer does not respond; or (4) the assessment is based on an IRS notice that was returned as "undeliverable" when the IRS could not locate another address (id.). IRS guidance also suggests that although the fraudulent failure-to-file penalty is under Sec. 6651, it should not be exempted as a penalty automatically calculated through electronic means.

The federal courts have significantly clarified the scope of the written managerial approval requirement under Sec. 6751(b). Although the IRS has updated its internal procedures to ensure better compliance, Sec. 6751(b) will remain a potentially potent penalty defense where the IRS cannot prove it properly obtained written managerial approval of the penalty. Taxpayers and tax practitioners alike should stay tuned to more developments as the federal courts continue to address the issues related to Sec. 6751(b).

For a detailed discussion of the issues in this area, see "Penalty Defenses and the Supervisory-Approval Requirement," in the August 2020 issue of The Tax Adviser.

Also in the August issue: