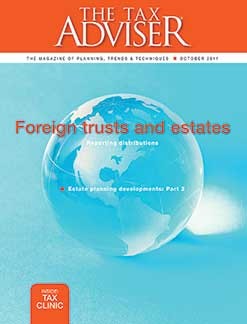 In tax practice, bright-line rules provide clarity and certainty for clients. One example is the statute of limitation for tax assessment. Under Sec. 6501, the IRS generally has three years (with some notable exceptions) to assess any additional tax owed. While it is easy to see the express exceptions in Sec. 6501—such as when no return was filed or when a fraudulent return was filed—some exceptions are not so readily ascertainable. One such example is found in the case of Bosamia, 661 F.3d 250 (5th Cir. 2011).

The IRS issued notices of deficiency to the petitioners, noting that the payer S corporation was not entitled to the deductions until the payee included the amounts in income. When the IRS issued these deficiency notices, the three-year statute of limitation had expired on some of the years in issue. The IRS, however, argued that the deduction disallowance resulted in a change in accounting method under Sec. 481. Consequently, it adjusted upward the payer S corporation's income in an open year. These S corporation adjustments created a corresponding deficiency at the shareholder level in an open year. The Tax Court upheld the Service's actions (see Bosamia, T.C. Memo. 2010-218).

On appeal, the Fifth Circuit, noting this was a matter of first impression, framed the issue as "whether the Commissioner of Internal Revenue effects a change in a taxpayer's method of accounting for the purposes of § 481 when he requires that taxpayer to postpone a deduction from gross income pursuant to § 267(a)(2)."

The Fifth Circuit explained that "Section 481 requires the Commissioner to adjust a taxpayer's taxable income to ensure accurate computation of income when that taxpayer changes its method of accounting from one year to the next." Quoting its prior opinion in Graff Chevrolet Co. v. Campbell, 343 F.2d 568, 570 (5th Cir. 1965), the Fifth Circuit noted that under Sec. 481, "if income escapes taxation because of a change in accounting method, the Commissioner may make an adjustment by including the omitted income in the year of the change."

Bosamia demonstrates a potential end run around the statute of limitation. This case is especially important for advisers of passthrough entities, in which the individual owners report flowthrough income. Practitioners and advisers need to be aware of how direct changes of accounting methods—or more indirect approaches, such as the application of Sec. 267—can practically affect the limitation period. Although Bosamia is not about an express extension of the limitation period, its resolution resulted, effectively, in an extended limitation period by making closed-year issues relevant in an open year.

For a detailed discussion of the issues in this area, see "Tax Practice & Procedures: Sec. 481 Adjustment Can Make End Run Around the Statute of Limitation," in the October 2017 issue of The Tax Adviser.