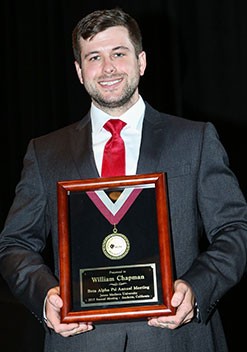 William Chapman, an undergraduate student at James Madison University, received Beta Alpha Psi's Medal of Inspiration Award. The award, which includes a $5,000 cash stipend, recognizes a student who has experienced extreme hardships and demonstrated an unusually high level of success despite that adversity.

Chapman, who joined the Marines after graduating from high school and performed intelligence and improvised explosive device cleanup missions in Afghanistan, was awarded the Purple Heart, which commemorates the sacrifices of U.S. service members wounded in battle.

After experiencing significant post-traumatic stress disorder (PTSD) while attempting to reenlist in the Marines, Chapman enrolled at James Madison University in Harrisonburg, Va., and began studying accounting. While there, he has made the dean's list, tutored fellow students, and worked with a literacy program to help refugees studying for their naturalization test. He was recognized at the university's Evening of Excellence for earning a nearly perfect grade in his accounting principles classes.