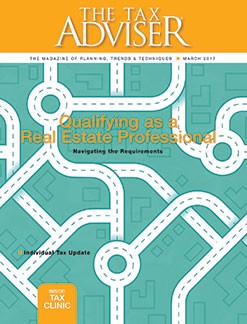 It is unlikely that Congress gave serious consideration to the state tax impact when it enacted the new rules. Although states generally rely on the Internal Revenue Code, at least in part, to determine their own state taxable income base, they normally rely on their own audit, assessment, and collection procedures. Thus, when the new federal partnership audit rules are fully implemented, nearly all of the states will have to take some legislative action to conform to them.

However, due to the information-sharing arrangements that states have with the IRS, as the Service gears up to manage and resolve more partnership audits, they may be inundated with partnership audit information. Many of them already recognize they are not fully prepared to deal with it. Moreover, just as there are 50 states, there are 50 ways they could choose to conform. Without some uniformity in critical areas, the "simple" federal reform of the partnership audit rules could result in an administrative nightmare at the state level not only for taxpayers but also for the states that will have to administer the information they will receive from the IRS.

For CPAs, the consequences are both professional and personal. As tax advisers to their clients, many of whom do business as partnerships, they need to understand the implications of the new rules not only to assist in the preparation of returns but also to advise clients on their responsibilities and obligations. Likewise, many CPA firms are organized as partnerships, so CPAs will be directly affected by the rules.

The good news is that state taxing authorities and tax practitioners alike have recognized the potential tidal wave of regulatory change. They have come together in an unprecedented way to identify the issues and begin to offer up solutions.

The AICPA has formed the State Partnership Audits Task Force (AICPA Task Force), which is composed of members with expertise in state tax and partnership tax issues. The AICPA Task Force is part of a joint multi-organization task force that comprises other state tax groups, including the Council on State Taxation, the State and Local Tax Committee of the Tax Section of the American Bar Association, and the Tax Executives Institute, working on this issue and in dialogue with the Multistate Tax Commission (MTC), which is providing input to state tax officials. The MTC has started a partnership informational project that is considering an issue list related to these impending changes.

For a detailed discussion of the issues in this area, see "State & Local Taxes: State Challenges With the New Federal Partnership Audit Rules," in the March 2017 issue of The Tax Adviser.