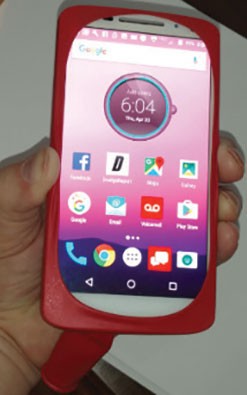 As you may recall, last year I replaced my waterproof Samsung Galaxy S6 smartphone with a shatterproof Motorola Turbo 2 smartphone after my Samsung broke in my pocket when I plopped down in my seat at a Major League Baseball game (see the July 2016 Technology Q&A item "Smartphones: Breaking News!!!"). I then became even more convinced of the wisdom of purchasing my new "indestructible" phone when it survived my essentially crushing it with a couch (see the March 2017 Technology Q&A item "Motorola Turbo 2 Update"). Yes, things were going swimmingly until I dropped my Turbo 2 smartphone into the ocean. Being a smart guy, I had inserted my smartphone into a zip-top plastic bag to take fishing in my kayak, a solution that seems to work well as long as you don't actually use your phone. However, my foolproof plan went awry when I took my phone out of the plastic bag to snap a selfie with a hammerhead shark dangling from my fishing pole. Rather than my describing what happened, let's just say this shark was camera-shy. I thought my phone was lost forever, but amazingly it washed up on shore a few hours later—completely ruined nonetheless. (Just as the otherwise invulnerable Superman is vulnerable to kryptonite, my "indestructible" Turbo 2 is vulnerable to water.)

This event has me wishing that Samsung, Motorola, or some other vendor would create an indestructible, waterproof smartphone for klutzes like me. Until then, I'll now be using a waterproof cellphone dry bag to protect my new smartphone from potential water damage. Listed below are a couple of dry bag options.

The SOCW Universal Waterproof Cellphone Dry Bag ($7.99 from Amazon as of May 2017) is made of clear polyvinyl chloride (PVC), which allows users to both see the phone and operate its touchscreen controls through the material. The case includes an armband and neck strap, and the manufacturer claims the case is good for taking pictures and videos underwater using your smartphone.

The GoStellar Universal Waterproof Dry Bag Case ($11.97 from Amazon as of May 2017) offers the same functionality and goes further by providing waterproof access to the phone's headphone jack, so you can listen to music or talk on the phone more easily while enjoying your aquatic activities.

You also may be interested in the poor man's method for waterproofing a smartphone, which involves letting the air out of a balloon while holding it against the back of your smartphone as you let the air escape. As pictured below, the balloon supposedly forms a watertight seal around the edge of the smartphone. I'm not sure if this unproven trick works, but after wrapping a balloon around the edge of my smartphone as a test, this trick looks somewhat promising. The JofA cannot guarantee this trick will work, but I'm wishing I had at least tried this hack during my last fishing adventure.