I've always considered the quip "C-P-A stands for cheapest-price-available" to be a joke, but in this case this quip may hold true. A reader responding to the April 2017 Technology Q&A item "What Fonts Work Best in Excel?," suggested that I should have recommended a skinnier font than Calibri to save ink and money. As the reader points out, Microsoft also offers a skinnier version of Calibri called Calibri Light that can save money. Presented below is a comparison of Calibri versus Calibri Light.

Several studies seem to suggest the reader is correct. On average skinnier fonts appear to use about 30% less ink than standard fonts, which could potentially reduce print toner costs by up to 30% (assuming you print text only with no images). For example, a 2010 study conducted by the University of Wisconsin—Green Bay indicated the university spends approximately $100,000 a year on toner and that the university could save up to $30,000 annually by switching from the Arial font to the Century Gothic font to meet its printing needs. Honestly, the thought had never before occurred to me.

In addition to Calibri Light, Windows includes a variety of skinnier fonts that may be considered suitable for business use, a few examples of which are presented below (the respective fonts have been applied to each font's description). 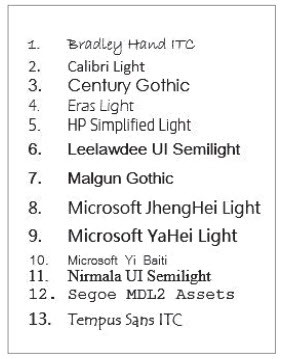 Interestingly, the Dutch company SPRANQ (available at ecofont.nl offers a TrueType font called Ecofont Sans, which reduces ink consumption by punching tiny holes in your document's existing fonts, thus reducing the amount of ink used by at least 15% compared with the original font, according to the company. The tiny font holes do not show up on screen; they only affect the paper-printed version. Even on the paper-printed version, though, the holes are reportedly so tiny they are not visible. A single lifetime license of Ecofont is priced at €19.95 (or $22.14, as of June 2017). After the Ecofont software is installed, an Ecofont print button appears in the Word and Outlook menus, enabling you to apply the economical effect to your documents that contain common Microsoft fonts such as Arial, Calibri, Times New Roman, Trebuchet, and Verdana. The resulting document's appearance remains the same to the naked eye, and the software reportedly works with all brands of printers. Perhaps one day, similar technology may be built into all of our printers by default. Depending upon the amount of ink you use, it does appear you could save enough cash to justify switching to a skinnier font, such as Calibri Light. Keep that feedback coming.