Q. I have used Uber a few times and found that both the pricing and experience were great, until now. My most recent Uber trip from the airport was very expensive. What's going on with Uber?

A. In some cities, politicians have enacted regulations and surcharges requiring both taxicabs and Uber drivers to charge more in certain venues, such as airports. In addition, Uber's prices surge upward during peak traffic hours based on a supply-and-demand algorithm that factors in the number of available Uber drivers compared with the number of customers. (Uber claims that surge pricing is not employed during local emergencies, even if demand is higher.) Presented below are a few suggestions that may help minimize your Uber fees.

There are also several "surge protector" third-party apps available that plot the direction and distance you need to walk in real time to avoid Uber's surge pricing.

Check Uber's competition. Uber has several competitors, including Lyft (lyft.com) and Curb (gocurb.com). One of these competitors may save you a few dollars, particularly during periods of price surges.

Use UberBlack. If you find yourself in need of a ride during a period of price surge and you have no choice but to pay the higher Uber fare, why not ride in style? Instead of using Uber, click the UberBlack option to have a fancier vehicle pick you up. 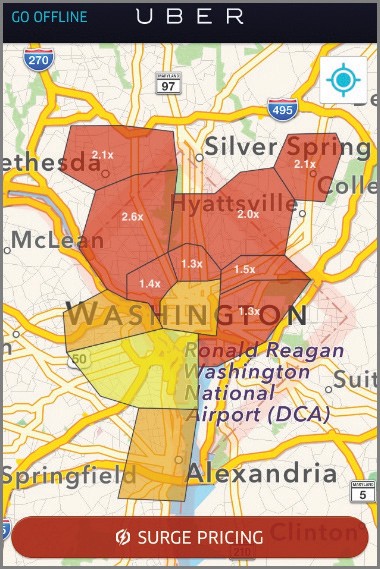