A majority of CPAs who called the IRS practitioner support line during the 2016 tax season found it difficult or very difficult to reach a representative, although the assistance they received was for the most part rated satisfactory. Those were among the findings from this year's JofA and The Tax Adviser tax software survey that, besides tax software, also asked about respondents' experience calling the IRS's Practitioner Priority Service (PPS).

The PPS is a nationwide hotline (866-860-4259) staffed by specially trained representatives that the IRS describes as practitioners' "first point of contact." It may be used by CPAs and other practitioners with valid authorizations to represent clients and who are "actively working with their clients" to resolve clients' tax account issues. Practitioners' questions about applicable tax law (other than those related to IRS communications or general procedures and time frames) will be considered "out of scope" and transferred to another IRS function, as will calls about taxpayer accounts assigned to a revenue officer or agent, correspondence examination, or Automated Collection Services and Automated Under Reporter functions (webpage on irs.gov).

IRS telephone service of all types for practitioners and taxpayers plummeted during the 2015 tax filing season to levels that IRS Commissioner John Koskinen acknowledged were "unacceptably low" (written testimony before the Senate Homeland Security & Governmental Affairs Committee, April 16, 2015). National Taxpayer Advocate Nina Olson called it "by far the worst in memory" (Fiscal Year 2016 Objectives Report to Congress, page 8). Only 37% of taxpayers calling on general help lines reached a representative, and those who did spent an average 23 minutes on hold (National Taxpayer Advocate, Fiscal Year 2017 Objectives Report to Congress, page 56).

PPS callers fared no better, with 45% getting through after an average of 45 minutes on hold. After Congress passed a special budget appropriation to improve the service for both the general lines and the PPS, the answer rate improved through April 15 this filing season. According to Olson's Fiscal Year 2017 Objectives Report, general phone service attained a 72.6% average answer rate with 11 minutes' average wait time during the January to mid-April filing season—the best level of service since 2011. The PPS answer rate went up during that period to 84%, with a 7.3-minute average wait time. The quality of the service provided, as well as the training and experience of the IRS representatives, was not reported.

PRACTITIONERS' EXPERIENCE WITH THE PPS

Against that backdrop, the annual tax software survey for its first time in 2016 included three questions about PPS service. Of the 3,851 respondents who said they prepared 2015 returns for a fee, nearly 40% indicated they called the IRS using the PPS during the 2016 tax season. Of those, 51% said it was difficult or very difficult to get through to a customer service representative (see the chart "How Easy Was It to Get Through to an IRS Customer Service Representative?"). Asked how satisfied they were with the quality of the help they obtained via the PPS, 45% of CPAs were satisfied or very satisfied, while 30% were dissatisfied or very dissatisfied, with an average near the midline (3.2 out of 5, with 1 being very dissatisfied and 5 being very satisfied) (see the chart "How Satisfied Were You With the Quality of Help You Got From the Practitioner Priority Service?").

How easy was it to get through to an IRS customer service representative?

How satisfied were you with the quality of help you got from the Practitioner Priority Service?* 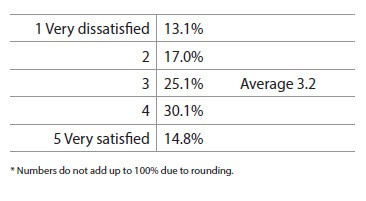 Because this is the first year the tax software survey asked these questions, comparisons with previous years are not possible. But another AICPA member survey has asked similar questions for the past two years (see "AICPA Members Weigh In on IRS Service Levels," JofA, May 26, 2016). Respondents to that survey who said they never or rarely were able to get through to a representative on the PPS went down from 31% in 2015 to 24% this year. Those saying they got through always or most of the time went up from 38% to 44%. CPAs' estimated time waiting for calls to be answered went down as well, with respondents who, on average, reached a person in less than a half-hour increasing by three percentage points. It is unknown how many CPAs stopped trying to call the IRS for assistance after their experience last year.

Respondents still have concerns regarding the quality of service obtained. Asked whether the initial IRS representative they reached was able to answer their question without transferring them to another agent or telling the caller the matter was out of scope, 29% in 2016 said they rarely or never received an answer from the first representative they spoke with, three percentage points less than in 2015. By the same token, this year, only 33% said they received an answer most of the time or always without being transferred—a slight improvement over 30% in 2015.

As Olson noted in her latest report to Congress, citing the broader AICPA survey findings, despite PPS improvements for 2016, tax professionals still are not necessarily satisfied with the quality of the service they received (Fiscal Year 2017 Objectives Report to Congress, page 63). Moreover, that AICPA survey also indicated CPAs believe the IRS is far from the "modern-functioning, evolutionary and respected federal agency for the 21st century" envisioned in a resolution by the AICPA Council in May 2015. Only 10% of respondents said that phrase currently describes the IRS. The resolution, citing last year's dismal IRS service statistics, called on policymakers to create "an objective, bipartisan forum" of stakeholders to recommend improvements. Several initiatives since then could be said to have provided such a forum. The AICPA conducted a "fly-in" to Washington in February by leaders of the Institute's Tax Division, who met with legislators and Koskinen.

CAN THE PROBLEMS BE FIXED?

Olson this year conducted a series of meetings throughout the United States, which included CPAs and other tax professionals as well as taxpayers, to discuss the IRS's plans for its "future state." These plans call for more taxpayer online self-service and less telephone interaction, among other aspects (Koskinen's Senate Finance Committee testimony, Feb. 10, 2016, excerpted transcript available at irs.gov). Olson has pointed out that many taxpayers prefer to use only routine online services or none at all.

Selected public comments from the forums included in the Fiscal Year 2017 Objectives Report to Congress sound a similar note, such as this one by Tamara Borland, an attorney and director of an IRS Low-Income Taxpayer Clinic in Des Moines, Iowa: "I think there's a lot of problems that the IRS needs to solve about their customer service now, and if they improve their services as they stand now and then move to a web-based platform, or at least offering more web-based platform, then I think they will have a good model to build upon, but I don't think they're there yet."

Statistics are not available for IRS phone levels of service before Jan. 1 or after April 15, when the IRS customer service staff is not augmented by seasonal help, and the need for which would particularly rise for CPAs and other year-round pracititioners as the extended due date of Oct. 15 approaches.

Where to find more

The Tax Adviser is available at a reduced subscription price to members of the Tax Section, which provides tools, technologies, and peer interaction to CPAs with tax practices. More than 23,000 CPAs are Tax Section members. The Section keeps members up to date on tax legislative and regulatory developments. Visit the Tax Center at aicpa.org/tax. The current issue of The Tax Adviser and many other resources are available at thetaxadviser.com.