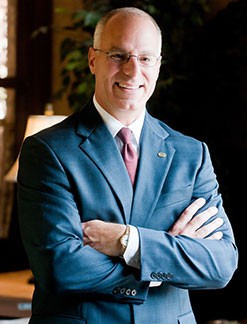 Greg Anton, CPA, CGMA, the chairman and CEO of Anton Collins Mitchell LLP in Colorado and a former chair of the AICPA board of directors, received the Institute's 2015 Gold Medal Award for Distinguished Service.

The Gold Medal is the highest award granted by the AICPA and is given to CPAs who have made major contributions to the CPA profession.

Anton served as chair of the AICPA's board of directors from 2011 to 2012. He presently serves as part of the AICPA delegation to the International Federation of Accountants. He is the founder of the Institute's "What's at Stake" initiative, which promotes federal fiscal responsibility.

Anton also served as chair of the Colorado Society of CPAs (COCPA) during its centennial year and co-chaired its foundation's Centennial Scholarship Campaign, which raised over $1 million. In 2013, he received the COCPA's Distinguished Service Award for his contributions to the CPA profession.

He has been recognized by several publications as a key influencer in the profession, and he serves on the boards of numerous philanthropic organizations.