Let it snow (but to be sure, use an IRS-approved PDS) 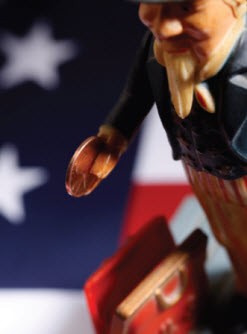 As children, we always loved to hear that school was closed for a snow day, which meant we could push off homework assignments and exams until school reopened. However, what happens when the Tax Court decides to close its doors due to an impending or ongoing snowstorm and is therefore "inaccessible" for filing petitions? The court recently decided this issue in the ongoing case of Guralnik, No. 4358-15L (Tax Ct. 8/24/15) (order denying motion to dismiss).

The IRS sent taxpayer Felix Guralnik a notice of determination sustaining the filing of a federal tax lien for tax years 2003 and 2005. The notice, dated Jan. 16, 2015, gave Guralnik 30 days to file a petition with the Tax Court under Sec. 6330(d)(1). Guralnik mailed his petition to the court on Feb. 13, 2015, using FedEx's First Overnight delivery service.

The last day of Guralnik's 30-day period to file the petition fell on Sunday, Feb. 15, 2015. The next day was the observance of George Washington's birthday, a legal holiday in the District of Columbia, further extending the filing deadline under Sec. 7503 to the next business day, Tuesday, Feb. 17. However, a winter storm hit the Washington area that Tuesday, closing down the federal government, including the Tax Court. Since the court did not have an after-hours drop box, FedEx could not deliver the petition until the court reopened on Feb. 18.

The IRS moved to dismiss the case due to lack of jurisdiction, arguing that the petition was filed after the 30-day filing period had expired. The taxpayer argued that the petition was timely filed, since it was properly mailed to the Tax Court before the end of the 30-day period. He alternatively contended that the snow closure of the Tax Court clerk's office made it inaccessible, under Federal Rules of Civil Procedure (Fed. R. Civ. P.) 6(a)(3)(A), on the last day for filing, extending the time until the court was accessible.

The IRS countered that the FedEx First Overnight service was not an acceptable private delivery service (PDS) under Sec. 7502(f)(2). (The delivery service had become available only after the then-applicable guidance, Notice 2004-83, had been issued. In May 2015, it was added to the list of PDSs by Notice 2015-38.) Therefore, since the petition was sent by neither the U.S. Postal Service (see Sec. 7502(a)) nor an approved PDS, the IRS maintained that filing was made at the time of delivery, not when the taxpayer mailed it. In this situation, according to the IRS, the petition should have been filed by Feb. 17, even though the Tax Court was closed that day due to a snowstorm, since the winter storm did not meet the definition of a legal holiday under Sec. 7503 and Regs. Sec. 301.7503-1(b).

The court held that the petition was timely filed by the taxpayer when the court reopened for business on Feb. 18, 2015. In holding for the taxpayer, the court delved into the legislative history of Sec. 7503, saying Congress intended it to apply in such instances.

The court further agreed with the taxpayer that Fed. R. Civ. P. 6(a)(3)(A) extended the filing time to the day the court became accessible after it was closed by snow. The court also cited Winkler, 56 T.C. 844 (1971). In Winkler, the federal government had moved Washington's birthday from his actual birthday to the third Monday of February, although the D.C. Code, which governs the operation of Sec. 7503, had not. The court in Winkler reasoned that the third Monday should have been considered a legal holiday in the District of Columbia, but relied ultimately on the fact that the court was inaccessible to receive petitions on that day. The IRS adopted the court's holding in Winkler in Field Service Advisory 200021010, which states that "the underlying purpose of Sec. 7503 is to extend the time for filing a document when the last day for filing would, under the general rule, be a day on which the office in which the document had to be filed was closed."

Guralnik demonstrates how the Tax Court's inaccessibility for delivery can extend a petition filing deadline. How the principle might extend to other courts and the IRS, as well as other reasons for agency or court closure or other types of filings, remains less than clear. When the IRS closed its offices and furloughed most employees on selected days in the spring and summer 2013 as a result of federal budget "sequestration," deadlines for filing tax returns and paying taxes were unaffected, although if the last day for responding to an IRS request was a furlough day, taxpayers had until the next business day to comply (News Release IR-2013-51).

At any rate, taxpayers can avoid uncertainty by filing on time and using a PDS approved by the IRS under Sec. 7502 and Notice 2015-38 and its future updates (even if a newer or faster service is available), by which the postmark or mailing date is deemed to be its date of delivery. (Note also that, while the Tax Court has made e-filing of other pleadings mandatory for most parties represented by counsel and available to pro se petitioners, it currently allows initial filings, such as petitions, to be filed only in paper form.) If Guralnik had used an approved PDS or even the U.S. mail, his petition apparently would have been timely filed despite the snowstorm. And, of course, although the snow day worked ultimately to his advantage, taxpayers cannot, like hopeful schoolchildren, count on bad weather to save them.