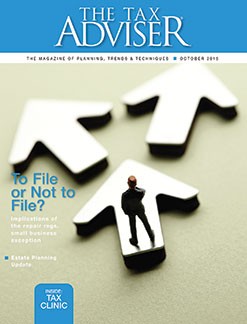 When a couple have filed joint returns in the past and file separate returns in the current year due to a divorce, estimated tax payments for the current year are typically credited to the first person listed on the previous year's joint tax return. The first person listed is the "taxpayer." However, problems can arise when the "spouse" has substantially all of the income in the relationship. Currently, there is no reliable way to communicate to the IRS and state taxing authorities that the estimated tax payments belong to the spouse, even though they are under the taxpayer's Social Security number since the taxpayer is listed first.

According to IRS Publication 505, Tax Withholding and Estimated Tax, couples who have filed joint returns in the past and will be filing separate returns in the current year due to a divorce can divide estimated tax payments in any way they can agree upon. If an agreement cannot be made, estimated tax payments for the current year should be divided in proportion to each spouse's tax as shown on their current year's separate returns.

While in theory this is a reasonable solution, in practice it seems to be difficult. Often, during a divorce, communication between the spouses is minimal, at best, due to the high emotions and stress from legal proceedings. The lack of communication makes it difficult to calculate the portion of estimated tax payments that should be assigned to each spouse. In some cases, one spouse may file his or her tax return early in the tax season, since it has minimal activity, and have a large refund already credited before the ex-spouse files his or her tax return.

OVERPAYMENTS ON PAST JOINTLY FILED RETURNS

A problem identified in numerous cases is that the IRS will ignore these calculations and simply allocate the entire overpayment to the first taxpayer without allocating any of the overpayment to the spouse, which seems unfair. This can be the case even if a suitable calculation was done and documented on the taxpayer's and the spouse's separate returns. A potential solution to this problem might be to treat the overpayment as a marital asset or as part of the community property. Treating it in this manner would allow one spouse to claim it and have it be offset against other assets being divided in the divorce. This approach could prove simpler than providing a calculation to the IRS, which may overlook it anyway.

Since divorces are so common, the IRS and state taxing authorities need a better and simpler approach to assigning estimated tax payments and crediting overpayments from previous jointly filed tax returns.

For a detailed discussion of the issues in this area, see "Assignment of Estimated Tax Payments in a Divorce," by Jason Borkes, CPA, in the October 2015 issue of The Tax Adviser.

The Tax Adviser is the AICPA's monthly journal of tax planning, trends, and techniques. Also in the October issue: