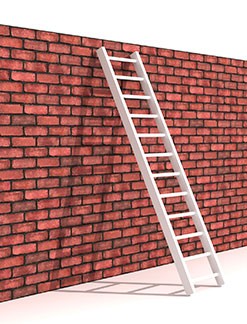 When we come up against a constraint in the workplace, such as a lack of resources or an impossibly short time frame, we tend to see it as a limitation, which ultimately stifles creativity and performance. But what if we started to look at constraints as opportunities instead?

This is the question posed by author Adam Morgan. He outlined strategies that leaders and organizations can use to change the way we look at constraints and turn them to our advantage.

When approached in the right way, constraints can stimulate us to achieve more and can be an impetus for a better outcome, Morgan said during a recent presentation at the London Business School's Global Leadership Summit. For instance, Twitter's limit of 140 characters per post forces users to craft a concise and easily digestible message, which is an inherent part of the platform's popularity.

The Google homepage provides another example. The simplicity of the design is one of its strengths, but that look was determined by the extent of Google co-founder Larry Page's coding ability at the time, and the fact that he couldn't afford to hire anyone else to help.

Morgan advised leaders to adopt the following strategies to turn challenges into opportunities:

Ask propelling questions. When we frame our ambition, we often ignore the challenge we are facing, such as a lack of resources. Morgan suggested that instead we ask what he described as "propelling questions," which involve linking the size of your ambition and the specificity of your constraint into one. This propels you out of a path that you may have been going down fruitlessly for years.

A propelling question simply can't be answered in the way you have responded to the last five or six challenges, forcing teams to think in a different way and interrogate their underlying assumptions.

For example, in the mid-2000s, Audi's focus was on winning the 24 Hours of Le Mans race, but the engineering teams, like their competitors, had already focused on the speed of their cars and conducted endless wind tunnel experiments to create vehicles so fast they exerted two tons of downward thrust.

Rather than frame the challenge in terms of speed, the question posed by the chief engineer was "How can we win Le Mans with a car that can go no faster than anyone else's?"

That question couldn't be answered with wind tunnel experiments. Instead, the engineers realized that it is possible to win Le Mans in those circumstances if you pull in to the pits less often, and the solution they found was diesel technology. The resulting R10 TDI went on to win the 2006 24 Hours of Le Mans, and was the first diesel vehicle ever to win the race.

Never say never. When attempting to solve difficult problems, keeping optimism alive is essential. So in meetings at U.K. bakery Warburtons, CEO Colin Kelly does not allow anyone to use the phrase "we can't do this because ...." Instead, they are invited to frame the idea in terms of "we can do that if ...."

This technique keeps the conversation focused on how the problem can be solved rather than whether it can be solved, Morgan said, and it keeps optimism and inquisitiveness alive in the room. It also changes the narrative participants create about themselves from "we are people who create barriers and impediments" to "we are people who find solutions to problems."

Take a fresh look at resources. "We have to get used to thinking about our resources in a different way," Morgan said. "In a post-abundant world, we see our resources in business as the things we own, the budget we are given, and the assets we are sitting on.

"Instead, we need to think of ourselves as having an adjacent network of abundance and knowledge that we don't own but we do have access to, and our job as leaders is to work out how to access those and to persuade the owners of those to let them flow to us and let us use them, for our good and theirs."

Online furniture retailer Made.com took full advantage of its network of resources last year to find a way to exhibit for the first time at a furniture show in Milan. The company's propelling question was, "How can we exhibit at the most prestigious show in the world if we can't afford the exhibition fee?"

This led the retailer to think, "We can if we don't actually appear in the exhibition hall. We can if we find four of our fans who have apartments in Milan, borrow each of those apartments for one day, and exhibit inside them."

The constraint of not being able to afford the exhibition fee ultimately created a better solution for Made.com because the furniture was displayed in real homes. And, because the retailer was doing something fresh and imaginative, it attracted 1,000 visitors over the four days, as well as extensive press coverage.

As we move into an environment with more unusual problems and constraints, Morgan said, how good we become at using strategies like these to overcome them will determine our success over the next 15 to 25 years.

The complete version of this article, "How to Turn Constraints Into Opportunities," by Samantha White, is available at cgma.org.