Today, making computers actually perform separate tasks/processes at the same time requires multiple core processors, which is why computer manufacturers have moved to multiple core processor designs. Based on this explanation thus far, you might conclude that more processors translates to faster performance, but this is not necessarily the case because at some point adding core processors has diminishing returns. This is because while your computer may frequently be doing four or five things at a time, it is rarely doing nine or 10 things at a time, so adding a ninth or 10th core processor is almost pointless. For example, in addition to the four processes mentioned above, assume your computer is also displaying your webcam, scanning an image, retrieving a webpage, and playing music. Even in this unlikely scenario where eight activities are being processed, eight core processor chips are sufficient to handle the workload simultaneously.

The various editions of Windows 8.1, 8, 7, and Vista are designed to support a maximum of 32 or 256 core processor chips, depending on the specific version (Home or Professional) and the operating system's architecture (32 or 64 bit). However, if you purchase more than eight core processor chips, those additional chips will likely sit idle the vast majority of the time, simply because your computer rarely performs that many operations at the same time.

Important caveat: I should note that there are slight exceptions to the above-stated reasoning. For example, my 2-year-old HP Envy desktop computer ($850 from Sam's Club) has eight core processor chips, and my 64-bit Excel application has the capacity to use all eight chips at the same time to tackle voluminous calculations. Therefore, if Excel needs to make a voluminous calculation, it can distribute that calculation across all available core processors, as suggested in the Excel options setting dialog box below.

To extend this example further, if my computer had 256 core processor chips and I frequently performed voluminous calculations, Excel could simultaneously use all 256 cores to perform the massive calculations faster. Therefore, in special situations, more than eight cores may be warranted. 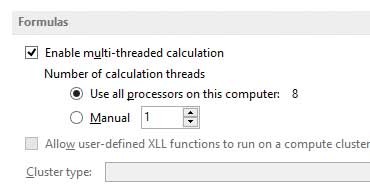