Migrating to a low-tax state to retire doesn’t always allow people to escape estate and inheritance taxes in the states they left.

As 2014 drew to a close, Florida finally pulled ahead of New York to become the nation's third most populous state, following California and Texas. But retirees and others from northern states who take up residence in Florida and other sunny, low-tax states should not be surprised when their former home states are reluctant to see them go as taxpayers.

State domicile typically arises in the context of not only state income taxes, but also state estate or inheritance taxes. Currently, 19 states and the District of Columbia impose estate or inheritance taxes, or both, in addition to the federal estate tax. These taxing authorities generally reach nonresident estates owning real estate or tangible personal property within their borders. Florida, Texas, and Nevada don't have income taxes or estate taxes.

For a retired snowbird, avoiding estate or inheritance taxes up north is not as simple as it would seem. Sometimes the individual didn't cut enough ties to the old state, so he or she is still considered a resident.

Individuals should be aware that they can be considered to be a resident in more than one state although they will be domiciled in only one state. Domicile is defined as a person's fixed or permanent abode that the person intends to remain in indefinitely and to which the person intends to return. Residency is a much more flexible term and may be defined differently depending on the state. For example, some states determine residency by looking at whether a person has a permanent place of abode in the state and lives in it a certain number of days in the year.

Just owning a vacant lot, other real property, or even tangible personal property located in another state can require a nonresident estate tax return to be filed, and the state exemption amount is often much lower than expected.

Estate taxes generally apply a graduated tax rate schedule to the taxable value of a decedent's total estate. Bequests to surviving spouses and charities are typically exempt from the tax, in addition to a dollar amount for exemption that applies to all other estate beneficiaries.

The filing requirement for a nonresident estate tax return in some states (including Connecticut and Maryland) generally kicks in when the value of the decedent's worldwide assets exceeds that state's exemption amount, not, as one might expect, when the value of the nonresident's assets located in the state exceeds the exemption amount. This means, for example, that the estate of a Florida widow with $2.4 million cash and a vacant parcel of land in Connecticut worth $100,000 will have to file a Connecticut estate tax return and pay the state about $1,000 in tax. But there's more bad news.

SEARCHING FOR RESIDENTS AMONG THE NONRESIDENT FILINGS

In an attempt to ensure that they are not missing out on property they could be taxing, various states require the estates of nonresident decedents to complete sometimes onerous paperwork. For example, a nonresident estate filing a Connecticut estate tax return must also complete a three-page questionnaire, Form C-3 UGE, State of Connecticut Domicile Declaration. As detailed as the questions about the decedent's lifetime connections to Connecticut are, the fiduciary is required to sign a statement that the answers are "true, complete, and correct," or be prepared to be fined up to $5,000, imprisoned up to five years, or both. The questions include:

As if rounding up the decedent's Connecticut medical records—and obituaries published around the world—were not burdensome enough, the Connecticut estate tax return instructions require an attached copy of the completed federal estate tax return (Form 706, United States Estate (and Generation-Skipping Transfer) Tax Return), even though the higher federal estate tax exemption amount means Form 706 does not have to be filed with the IRS. Depending on the complexity of the decedent's assets, preparing Form 706 can be time-consuming. That's another costly undertaking that is surprising for a nontaxable Florida estate.

In New York, the estate's representative or a family member must file a Form ET-141, New York State Estate Tax Domicile Affidavit, which asks for the decedent's address at the date of death and whether the decedent ever lived in New York or owned any real property in the state. The form also requires, for the five years preceding death, the decedent's residences; voting locations; federal, state, and local income tax return filing places; the location of any business or employment; and whether the decedent owned a safe deposit box in New York at the time of death.

Finally, the form asks about clubs or organizations the decedent belonged to, whether he or she had been a party in any legal proceedings in New York in the last five years, and whether and where the decedent had a business or professional license or a license to operate a car, boat, or airplane. If the decedent had listed his or her address on any trust indentures, deeds, or mortgages in the past five years, a copy of those documents must be provided. Although the affidavit is not sworn to under penalties of perjury, the signer must attest that all the answers are "true in every particular," and the affidavit must be notarized.

Massachusetts requires nonresident decedents' estates to file Form M-NRA, Massachusetts Nonresident Decedent Affidavit, which asks, among other things, where the decedent was born and died, where he or she is buried, and where surviving family members live. Similar to the New York questionnaire, Form M-NRA asks where the decedent lived, worked, voted, and filed his or her tax returns for the five years before death and whether he or she belonged to any organizations. Like the Connecticut form, Massachusetts asks whether the decedent had any medical treatment in the state in the five years before death.

A number of states impose inheritance taxes, with maximum rates ranging from 9.5% to 18%. These states include Iowa, Kentucky, Maryland, Nebraska, New Jersey, Pennsylvania, and Tennessee. Tennessee's inheritance tax (which functions much like an estate tax) will be eliminated beginning in 2016.

THE SOLUTION IS NOT AS SIMPLE AS MOVING TO FLORIDA

What should someone who owns property located in another jurisdiction do to avoid the transfer taxes and related administrative hassles? Obviously, the property could be sold, but that's not always possible or desirable. The property could be gifted to the person intended to inherit it, but that could have undesirable tax consequences for the recipient. Depending on the property's value, a federal gift tax return would be required. Connecticut, which is now the only state that imposes a gift tax, would also require a gift tax return for gifts of property located in the state. Another option may be to transfer the property to an irrevocable trust, a limited liability company, or a corporate entity, depending on the state where the property is located.

Florida retirees who want to avoid income taxes in the states they moved from are commonly advised to apply for the Florida homestead exemption, obtain a Florida driver's license, and register to vote in the Sunshine State. But many of these new Floridians still own homes and other property in other jurisdictions, frequently traveling back and forth with the changing seasons. It's not unheard of for a snowbird to die in his or her hometown, surrounded by close family, and be buried there. Some people who move to Florida wind up back where they came from, perhaps moving to a nursing home near relatives. Clearly, moving to Florida doesn't mean never paying estate tax to another jurisdiction.

Recent changes to the federal tax Code have reduced or eliminated the federal estate tax for many taxpayers. However, lurking in the background are the many estate and inheritance taxes imposed by 19 states and the District of Columbia. Some of these jurisdictions' exemption amounts are shockingly low, especially for nonresident estates. Awareness and careful planning could go far to avoid an unwelcome surprise. 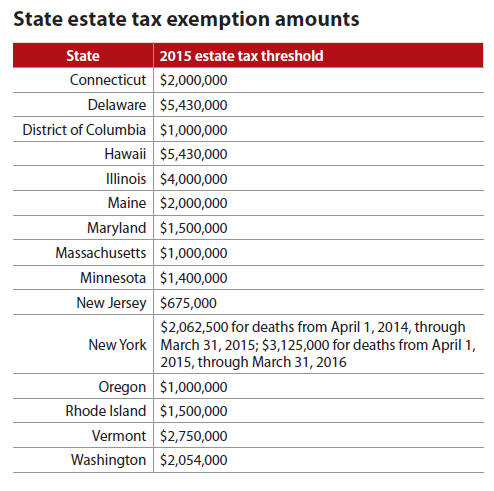 Liz Opalka (liz.opalka@quarles.com) is a trusts and estates paralegal for Quarles & Brady LLP in Naples, Fla.

"Professional Liability Spotlight: Considerations When Working With an Aging Client Base," June 2014, page 18