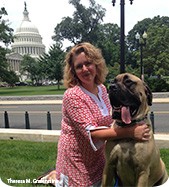 I work at the U.S. House of Representatives in a nonpartisan position. I am responsible for planning and leading independent, nonpartisan audits, advisories, and investigations of the financial and administrative functions of the House. I joke and say, “Just throw me into some combat zone. I can do a peace treaty with my people skills.”

Being nonpartisan, I sit in a room with both sides here. I’m with them all the time, and we have to make bipartisan decisions. They’re all on institutional things; it’s not political things. “What does enterprise risk management look like? How are we going to get through the next financial statement audit? Do we have good privacy controls? Can the House be hacked?”

I’ve been doing that for 17 years at the House, five of which have been as the actual inspector general. The way I describe it to people who live outside the Beltway, an inspector general is essentially like an internal audit department—with access to firearms, in the sense that we can do criminal investigations.

It’s like internal audit where we do financial audits, and we’ll do a lot of IT audits like firewall audits and business continuity and those types of things. We’ll look at computer systems that the House is putting into place to make sure that they’re secure and that people can’t defraud the House. We also do criminal investigations, so that’s sort of the funny reference to firearms. We’ll work with prosecutors in the event that somebody does something they shouldn’t be doing.

I’m speaking at the AICPA Women’s Global Leadership Summit in October. It’s a way for women leaders in the accounting and auditing profession to get together and share ideas. It’s good for, especially, some of the younger folks coming up through the ranks to see role models that they can identify with.

This is also for those of us who have forged this trail. We can help the younger women behind us and point out some tips and tricks that we learned the hard way. We can make their path a little easier. Early in my career I was on this accounting path, this auditing path, and while that would have been a great career, I saw that, at least in the government space, cybersecurity was the 800-pound gorilla in the room. When I first went that route, it was kind of interesting because it was heavily, heavily male-dominated. It still tends to be.

I’m still a CPA, and I still have definitely gone the accounting route. That makes me a better IT professional in the sense that so many IT people can’t relate to the business people and vice versa. I have a foundation in both.

To the young ladies who are entering their career path, they need to understand their environment. The thing I did was, I looked at job vacancy announcements, job postings to see: What skills were employers looking for? What were the job titles that were most plentiful with the higher-paid types of salaries? I decided I’d get those skills. ... I didn’t even leave my organization. I just got the skills because I saw that the trend was going toward IT. So that way, when the next job opened up, I was the person with the best qualifications.

—As told to Sheon Ladson Wilson, sheonlwilson@aol.com , a freelance writer based in Durham, N.C.