Q: Is it my imagination, or are tablets and smartphones now getting bigger?

A: After ENIAC (the world’s first computer, which filled an entire room) powered up on July 29, 1947, computers started getting smaller, until their tiny sizes finally exceeded the confines of practicality. Hollywood played up this trend in the film Zoolander in which Ben Stiller’s character uses a phone roughly the size of a postage stamp. Ever since manufacturers crossed the threshold of practicality, consumers have been leading manufacturers backward by purchasing larger devices. For example, consider the sizes of the five smartphones I’ve owned over the past eight years. My phone sizes diminished steadily until 2008, but, as pictured below, they started growing bigger as phones grew smarter. (This graphic portrays the actual sizes of my previous five smartphones in relation to one another.) 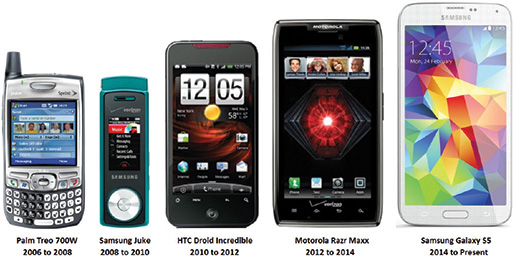 The same trend applies to some tablets; for example, Microsoft’s new Surface Pro 3 has 31.3% more surface area than Apple’s iPad 3. Even laptops aren’t immune to this recoil. Years ago, I used a 14-inch laptop for teaching courses. Since then, I’ve purchased multiple 15-inch laptops, and I now use two 17-inch Ultrabooks for this purpose. The lesson is that laptops, tablets, and devices can be too small to be fully functional. Therefore, you should not assume that a smaller device is necessarily the better device for your needs.

Submit a question
Do you have technology questions for this column? Or, after reading an answer, do you have a better solution? Send them to jofatech@aicpa.org. We regret being unable to individually answer all submitted questions.