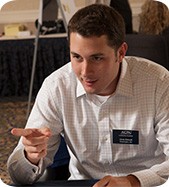 I remember when I was younger watching a film called The Untouchables. Kevin Costner, Robert De Niro … kind of the whole, “How are we going to get Al Capone?” The guy who really struck me in that played the accountant (played by Charles Martin Smith) who was working with Eliot Ness. That was when I said, “Hey, you can do some tactical and physical good by applying your business knowledge and your understanding of the circumstances.” Obviously, that’s the extreme case—of capturing a national crime syndicate kingpin. But also you can help companies operate better, operate under an ethical standard that is both efficient and appropriate for your organization.

The first case that really got me interested in the mechanics of forensic accounting: I was working for Deloitte’s federal group, and we were hired by the special inspector general over Iraq reconstruction. Part of this gentleman’s goal was to look at the spending of American groups in Iraq for that reconstruction and identify any flaws in the mechanics of that spending—any bad actors, any sham projects. We looked at $40 billion in spending with a team of about six people over a year and a half.

We focused the project on a system of “risk-ranking” transactions, vendors, and projects in relation to each other based on specific criteria. For example, if a payment was made to a vendor on a U.S. banking holiday, that transaction was scored higher than a transaction that occurred during a normal business day. That transaction, its parties, and other criteria were then flagged for additional risk related to the entities we were looking at.

Extrapolate that simple test to millions of transactions for billions of dollars, and we had developed an intelligent and defensible system of analysis for the entire effort. For our team, and for SIGIR (Special Inspector General for Iraq Reconstruction), we both gained a better understanding of best practices in government spending related to contingent operations abroad. Fraud is very hard to prove based simply on transactional data, but we facilitated the ongoing investigations of SIGIR into specific vendors and individuals to successful conclusions for our client.

That defensible, intelligent system we developed helped lay the foundation for me about the requirements of a forensic accounting project long term. Sometimes it can be easy to get excited in the developing details in a case. A successful forensic accountant needs to temper that excitement and focus on both proving the circumstances of the case as well as disproving any other possible explanation. Those themes ring true in all forensic accounting engagements, whether a large-scale spending review or a directed investigation into an individual suspected of embezzlement.

I started my job with a company called Duff & Phelps in the summer of 2011, and the gentleman who hired me came to me on the Friday after I started and said, “Well, you know the plan we had in place for you in our group has changed a lot.” He said, “I just got hired to be the testifying witness on financial matters for the trustee overseeing the Bernie Madoff bankruptcy.” We were on the ground directing trial strategy along the financial lines, and that’s experience I don’t think I’ll ever get again. To be that interactive with attorneys really taught me a lot about the role that accounting plays and the skills that a CPA has and how well they work in a legal environment.

Since I started with Hilton, I’ve been working for a very seasoned hotel auditor who’s been working for different hotel companies for about 30 years. His piece of advice to me (on fraud prevention) was, “Pretend you don’t know anything.” Approach individuals and business processes from that curious infant idea of, “I have no idea how any of this works. If you’re doing this, explain it to me.” You’re not putting people on edge. You’re not saying, “I’m here to investigate fraud. Where is your fraud?” It’s about being a participant in the process of improvement.

—As told to Chris Baysden, cbaysden@aicpa.org ,
a JofA senior editor.