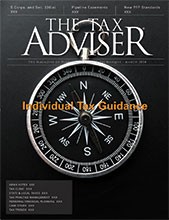 The IRS issued final regulations last May that apply when a Sec. 336(e) election is made to treat the sale, exchange, or distribution of at least 80% of the voting power and value of a target corporation’s stock as a nontaxable sale of all its underlying assets, which the regulations call a qualified stock disposition (T.D. 9619). In the biggest change from the rules in their proposed form, the final rules allow the Sec. 336(e) election to be made for S corporation targets.

The Sec. 336(e) election is intended to operate similarly to a deemed-asset election under Sec. 338(h)(10), except it does not require an acquirer of target stock to be a corporation or even necessarily a purchaser. Previously, the General Utilities doctrine had, with some exceptions, allowed a corporation to distribute appreciated property to its shareholders without recognizing gain. Sec. 336(e) was enacted when the General Utilities doctrine was repealed as part of the Tax Reform Act of 1986, P.L. 99-514.

Unlike Sec. 338(h)(10), which generally requires that a single purchasing corporation acquire the stock of a target, Sec. 336(e) permits the aggregation of all stock of a target that is sold, exchanged, and distributed by a seller to different acquirers for purposes of determining whether there has been a qualified stock disposition of a target.

Under these rules, the aggregate deemed-asset disposition price equals the grossed-up purchase price of recently purchased stock minus selling costs (or fair market value of recently distributed stock), plus liabilities of the target. The aggregate deemed-asset disposition price is adjusted for any LIFO recapture and built-in gains tax liability. Gains and losses from the deemed-asset sale pass through to the shareholders. The new rules facilitate what is essentially a sale of corporate assets without requiring an actual liquidation of the corporation.

For a detailed discussion of the issues in this area, see “Maintaining Single Taxation: Sec. 336(e) and S Corporations,” by Edward J. Schnee, CPA, Ph.D., and W. Eugene Seago, J.D., Ph.D., in the March 2014 issue of The Tax Adviser.

Also look for articles on the following topics in the March 2014 issue of The Tax Adviser: