The Tax Court holds that the IRS must fully consider an offer in compromise to promote effective tax administration.

The Tax Court held that the IRS failed to adequately consider on public policy or equity grounds an offer in compromise (OIC) that a married couple had made, and it remanded the OIC to the IRS for proper consideration.

Facts: Stacey and Timothy Bogart operated a construction company in the state of Washington for many years. During 2006 and 2007, their bookkeeper/tax preparer embezzled at least $116,000 from the taxpayers’ business. The amount, which was not reported as income on the taxpayers’ 2006 and 2007 income tax returns, was discovered during an IRS examination. The IRS assessed a deficiency (not disputed by the taxpayers) of $69,309 plus interest and later began a levy action against the taxpayers.

Although the bookkeeper was sentenced to prison and ordered to pay restitution of $116,000 to the Bogarts, they received no payments. The taxpayers properly asked for a collection hearing and eventually attempted to settle their 2006 and 2007 tax liabilities by offering $10,000 as an OIC to promote effective tax administration (ETA OIC). The IRS rejected the offer because it could find no economic hardship, concluding that consideration of an ETA OIC was not warranted. The Bogarts petitioned the Tax Court for relief.

Issues: The IRS may collect an unpaid tax liability by lien or levy, but a taxpayer may submit an OIC under certain circumstances, including as a collection alternative to a proposed levy. The IRS may compromise a tax liability if there is doubt concerning its existence or its amount, if its collectibility is in doubt due to the taxpayer’s lack of assets or income, or if a compromise would promote ETA. The IRS can accept an ETA OIC if full collection of the liability would cause an economic hardship or if the taxpayer can identify compelling public policy or equity considerations to justify the compromise. An ETA OIC for reasons other than economic hardship is justified only where, due to exceptional circumstances, full collection would undermine public confidence in fair and equitable administration of the tax laws and the compromise would not undermine taxpayer compliance (Regs. Secs. 301.7122-1(b)(3)(ii) and (iii)).

Both parties entered motions for summary judgment. The IRS contended that it properly rejected the ETA OIC, while the taxpayers argued that the IRS was required to accept their ETA OIC as a matter of law under these circumstances. If summary judgment for them were denied, the taxpayers argued, the IRS should be required to give their ETA OIC proper consideration, since it had previously failed to do so.

Holding: The court denied both parties’ motions for summary judgment. The court held that the IRS had not adequately considered the issue because it rejected the ETA OIC solely on the grounds of economic hardship and failed to consider whether the embezzlement was an exceptional circumstance under public policy or equity grounds. The court also rejected the IRS’s argument that it was entitled to summary judgment because the taxpayers’ situation was not addressed in the examples of non-economic-hardship ETAs provided in Regs. Sec. 301.7122-1(c)(3)(iv). The court held that the examples are not an exhaustive list, and other situations could warrant acceptance of an ETA OIC. The court stated that the IRS “must consider and address collection alternatives a taxpayer raises” and cited the 2012 Annual Report to Congress by the National Taxpayer Advocate as indicating the IRS too seldom uses ETA OICs for public policy or equity reasons for deficiencies stemming from third-party failures. (The report prescribed taxpayer relief specifically for failures by payroll service providers to remit taxes but included statistics for all non-economic-hardship ETA OICs—see related graphic.)

The court rejected the taxpayers’ argument that the IRS was obligated to accept their ETA OIC as a matter of law because, it held, the IRS is given a great deal of latitude when evaluating this type of request. However, it did hold that the IRS had not fully considered the ETA OIC and remanded it to the IRS for further consideration. 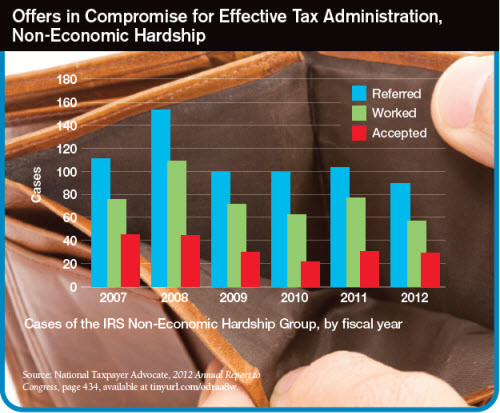