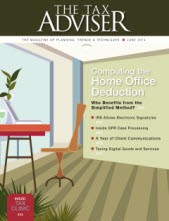 In a recent legal memorandum (AM 2014-001), the IRS affirmed the potential for retailers to claim the Sec. 199 domestic production deduction when they produce and distribute advertising fliers under a cooperative advertising agreement with a printer.

Under a cooperative advertising agreement, a vendor will provide an incentive for a retailer to feature the vendor’s products in the retailer’s advertising. The retailer can be compensated in a variety of ways, including direct payments and cost offsets. In its legal memorandum, the IRS discussed whether these payments from the vendor to the retailer could be treated as qualifying revenue for purposes of the Sec. 199 deduction.

The Sec. 199 deduction is computed as a percentage of the taxpayer’s net income from qualifying activities. If the payments from the vendor to the retailer qualify as domestic production gross receipts (DPGR), then they could be included in the calculation of the Sec. 199 deduction.

The IRS concluded in AM 2014-001 that payments under a cooperative advertising agreement can qualify as DPGR if they are intended to compensate the retailer for providing advertising services to the vendor. If there is no obligation to actually advertise the vendor’s products, then the payments would merely be purchase price adjustments and would not be included in DPGR because they would not be qualifying receipts.

While advertising is generally treated as a nonqualifying service for purposes of the Sec. 199 deduction, there is an exception for advertising revenue earned in connection with the taxpayer’s production of “newspapers, magazines, telephone directories, periodicals, and other similar printed publications” (Regs. Sec. 1.199-3(i)(5)(ii)(A)). Therefore, the IRS concludes, cooperative advertising payments compensating a retailer for advertising services associated with its printed fliers are gross receipts derived from the retailer’s fliers and qualify for the Sec. 199 deduction.

Taxpayers should also bear in mind that in this situation, they must bear the “benefits and burdens” of ownership of the advertising fliers during the production process to claim the deduction. The Tax Court recently addressed the benefits-and-burdens-of-ownership question in the context of advertising in ADVO, Inc., 141 T.C. No. 9 (2013). In that case, a taxpayer in the advertising business was denied the Sec. 199 deduction because it did not bear the benefits and burdens of ownership of its direct advertising materials during their printing by third-party printers.

For a detailed discussion of the issues in this area, see “Retail Advertising: IRS Affirms Potential Application of Sec. 199,” by Beth Benko, J.D., and James Atkinson, J.D., in the June 2014 issue of The Tax Adviser.

Also look for articles on the following topics in the June 2014 issue of The Tax Adviser: