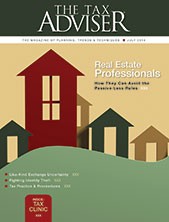 The Organisation for Economic Co-operation and Development (OECD) has recently been advocating for increased tax transparency and for international cooperation to prevent tax avoidance. One element of this international cooperation that the OECD would like to see implemented is country-by-country income and tax reporting by multinational corporations. Country-by-country reporting would be a boon for tax administrators, but it has the potential to be a compliance nightmare for companies.

The OECD’s plan would require multinational companies to report both their income and the taxes they pay to the governments of each country in which they operate, thus allowing those countries to determine if the company has avoided paying taxes in any country in which it has economic activity. Last fall, the OECD issued a draft Memorandum on Transfer Pricing Documentation and Country by Country Reporting, which examined the issues that must be resolved to implement country-by-country income and tax reporting. The two big issues are: What information should companies be required to report? And how would reporting and data sharing work?


For tax-reporting purposes, the OECD notes that several questions must be answered, including:


The OECD received numerous comments during the comment period on the memorandum, many of which focused on the increased complexity and compliance costs the proposals would impose on multinational corporations.

For a detailed discussion of the issues in this area, see “Country-by-Country Reporting: Challenges and Considerations,” by Shawn Felt, CPA, and Adam Hales, CPA, in the July 2014 issue of The Tax Adviser.

Also look for articles on the following topics in the July 2014 issue of The Tax Adviser: